The 2K Humble Bundle is live

It has been a while since we’ve had a big publisher launch a Humble Bundle but they usually go down pretty well with gamers. This time 2K is in the spotlight, offering up games like Bioshock, The Bureau: XCOM Declassified and Darkness II for as little as you wish to pay.

If you beat the current donation average ($7.41 at the time of writing) then you’ll receive Bioshock II, Mafia II and Spec Ops: The Line, in addition to whichever games get added in to the bundle later on. If you pay $20 you’ll also get XCOM: Enemy Unknown and Bioshock Infinite. 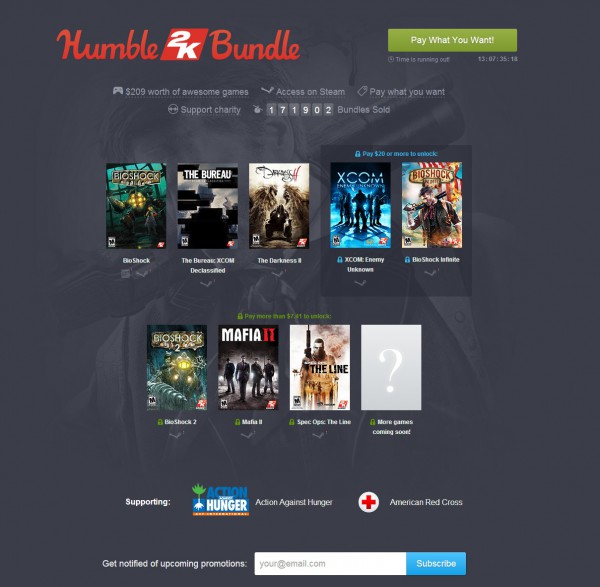 However, lets not lose sight of what’s important here, the Humble Bundle was created to support charity, the 2K bundle is raising money for Action Against Hunger and the American Red Cross so even if you already own some of the games in the bundle, it might be worth donating a little bit anyway.

So far, just over 172,000 people have bought the bundle, raising a total of $1,276,695.42 so far. Remember that you can also split your donation up any way you want between 2K Games, charity and the guys that run the Humble Bundle website.

KitGuru Says: It’s been a while since the last big Humble Bundle so it’s nice to see it come back strong. Have any of you guys bought the 2K bundle yet?

Previous Hearthstone Curse of Naxxramas DLC priced
Next 250,000 people signed up for the Razer Nabu beta