Update (13/02/18): Over the weekend, someone managed to get the rumor mill swirling by hijacking the Left 4 Dead 2 Facebook page link. The troll in question managed to assign the link to a fake personal page for Valve developer, Ted Carson, who has been tied to Left 4 Dead 3 in the past. The reason this managed to get fans hopes up was simple, the Facebook link on Valve’s official Left 4 Dead website linked directly to this fake page.

We expected Valve to act swiftly in this case, and while the company has not addressed the situation publicly, it has updated the Left 4 Dead website. Now, instead of linking to the fake Ted Carson profile, the Facebook shortcut links directly to the Valve Facebook page.

We still don’t know how the user managed to steal the Left 4 Dead 2 link and subsequently get the game’s official page taken down. Valve has not issued a comment, instead it looks like this is all just being quietly swept away.

Original Story (12/02/18): There has been an ongoing drought in news on future games from Valve, to the point where any small rumor or leak spreads across the web in an instant. Unfortunately, this fact is easily taken advantage of, as we saw over the weekend, with someone seemingly hijacking the Left 4 Dead Facebook page and turning it into a personal page teasing Left 4 Dead 3.

There have been a few ‘leaks’ pointing towards Left 4 Dead 3 over the years. Back in 2013, a post on pastebin came out listing different Valve employees and which projects they were working on. One Valve developer, Ted Carson, popped up on this list in addition to a second leak some time ago, where someone took a picture of a monitor in Valve’s HQ, showing that Ted Carson had edited a Left 4 Dead 3 folder on two separate occasions. 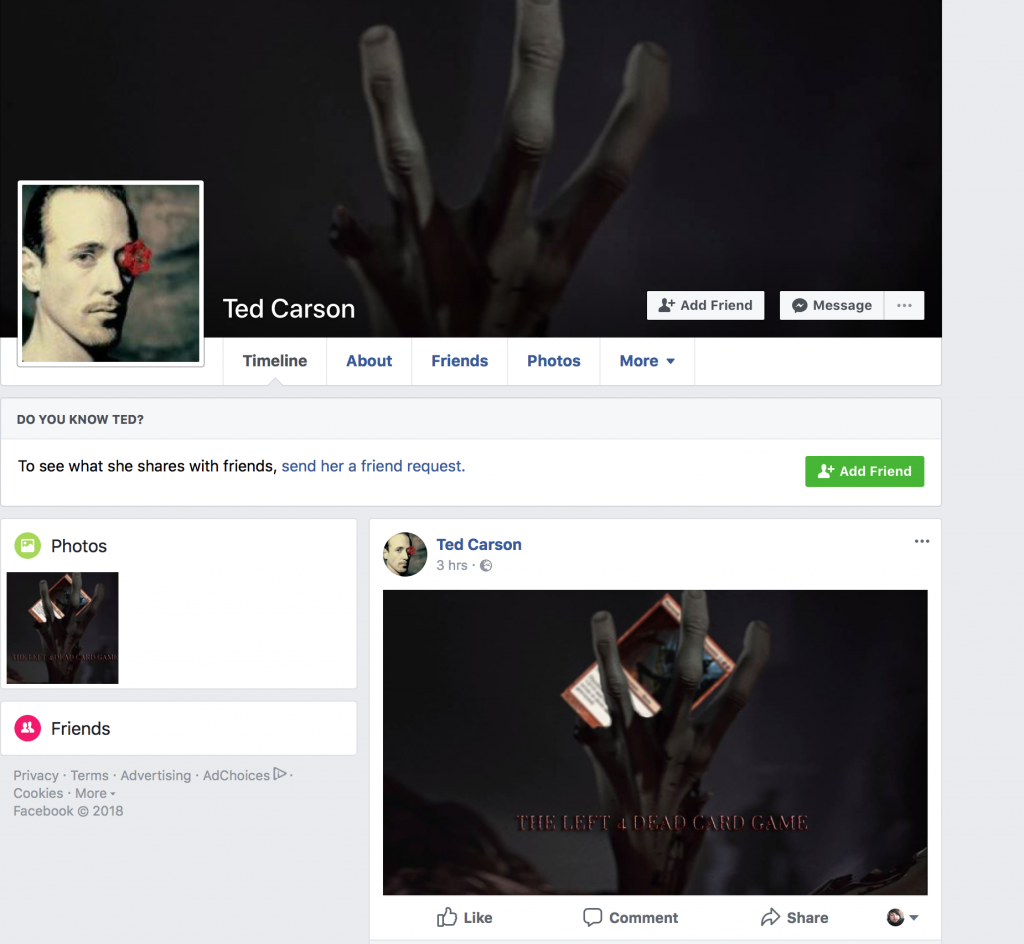 Now over the weekend, Left 4 Dead’s official website began linking to the personal Facebook page of someone claiming to be Ted Carson. This is because someone managed to edit their account URL to match the Left 4 Dead 2 Facebook page. The official Left 4 Dead 2 page has since been removed, along with the 1 million likes it garnered over the years.

The account has privacy settings active, so we can’t see much. However, it is open to friend requests, and the cover photo shows a zombie hand holding up three fingers. This has sparked fan hopes for Left 4 Dead 3.

So how do we know this is fake? Well for starters, linking to a personal Facebook account would be an incredibly odd way of teasing a game. However, aside from that, the cover photo appears to be a hand edited version of the original Left 4 Dead cover, removing one of the fingers. The account uploaded another version of this picture later on, adding a playing card to the hand with text that reads “Left 4 Dead card game”, poking fun at the fact that Valve is releasing a Dota 2 card game. Ultimately, this all seems to be an elaborate troll.

So far, nobody at Valve has commented on this. However, since this all took place on Sunday, that isn’t too surprising. I’m sure we’ll hear something and see some fixes later today when the Valve folks return to the office.

KitGuru Says: While this isn’t the most elaborate Left 4 Dead 3 troll we’ve seen, it has caught a lot of attention. I’d be very interested in finding out how someone managed to steal Left 4 Dead 2’s Facebook link. Hopefully this will all get straightened out this week.