The Machines is an Augmented Reality RTS heading to iOS 11

There was a lot to unpack following Apple’s iPhone launch event last night. We’ve already had a chance to cover the iPhone 8 and iPhone X announcements and the Apple TV 4K. However, one thing we didn’t touch on was the first Augmented Reality video game built for iOS 11. The Machines is an Augmented Reality RTS built for the next wave of iPhones and so far, it looks pretty cool.

The Machines is played using the iPhone’s new AR camera functionality. It allows you to point at a surface and see virtual terrain displayed on the screen. You can then walk around and view the entire map from any angle you choose, which is particularly advantageous for an RTS, where timing and planning is key. You can see the game in action via the video below:

The game uses spatial audio, so the volume will change based on how close or far away from the action you are. Sound will also muffle if your position is obstructed by part of the map, like a mountain. Under the hood, this game is running using Metal 2, which is Apple’s way of giving developers more direct access to the GPU, lowering API overhead and allowing for squeeze as much performance out as possible.

The Machines is developed by Directive Games based in Shanghai. As CEO, Atil Mar, explains in the video, the AR map itself consists of 1.2 milion polygons and 4K textures are also being used, so the game should look super sharp. Right now, we are unsure how compatible this game will be with older iPhones. However, if you are upgrading to the iPhone 8 or iPhone X then it should be very smooth as both new devices come equipped with Apple’s first in-house developed GPU, following the company’s split from Imagination earlier this year.

The Machines comes bundled for free in the iOS 11 update, which starts rolling out on the 19th of September.

KitGuru Says: While I do think this game looks cool, I can’t help but feel it would be better played within a headset, rather than using your hands to point the phone camera around the map. Perhaps Apple will explore its own headset later down the line once it has had more time to play around with Augmented Reality. 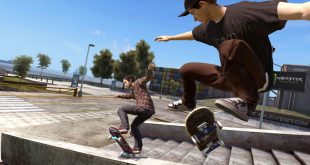 At the end of last month, Dan McCulloch announced that he would be leaving Microsoft …