EA is holding a closed alpha test for Star Wars Battlefront this month and while many of us got rejected, some people managed to claw their way in to the test phase and have since leaked the game's client, which is now floating around the web if you know where to look.

Since the game files are out and about, users have been mining them for information, revealing new details, including a list of ships available in the alpha, although some won't be playable. The alpha will also feature the two maps we saw at E3, one being the 40 VS 40 ‘Walker Assault' map on Hoth and then the other co-op map set on Tattooine. 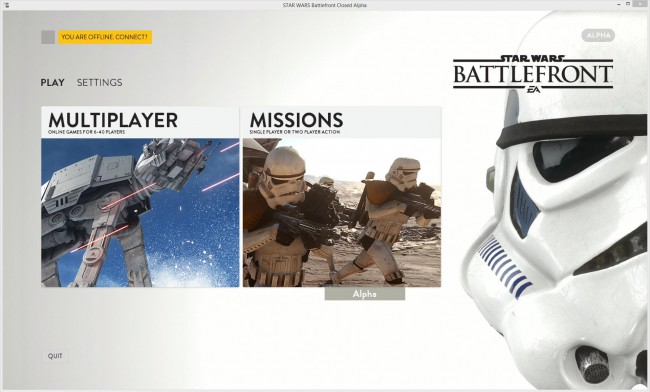 As you would expect, you can fly the X-Wing and the TIE Fighter, although early impressions from those who attended E3 seem to suggest that the flight controls aren't all that good. Some of the larger and more recognisable ships from the movies will be seen as background decoration in the maps.

DICE has already revealed that there is a lack of space battles in the game although users will be able to fly within the confines of the map. You can also ride the AT-ATs but they are on rails so you don't have a whole lot of control there.

A few people are already streaming the game on Twitch if you want to see some gameplay, although I imagine these streams will be shut down shortly.

KitGuru Says: Hopefully in a couple of months EA will hold an open beta for the game so more people can get in and try the game out ahead of release.