The Star Wars Battlefront Open Beta has a launch date

DICE recently announced the Star Wars Battlefront beta for October, though at the time some of the finer details were left out. Now, we know quite a bit more about the beta, for starters, we now have an exact launch date. We also know that it will be open to everyone on the PC, Xbox One and PlayStation 4. It will also be playable offline while also including co-op and split screen gameplay.

The beta is scheduled to kick off on the 8th of October, DICE has revealed, it will then end on the 12th of October. The beta will include the 40-player Walker Assault game mode on Hoth as well as a Drop Zone mission on Sullust, a new planet. There will be a Survival Mission mode, set on Tatooine, which we have seen some gameplay of previously and was also in the Alpha. 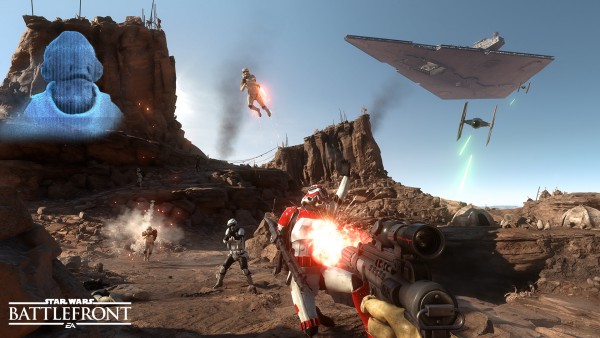 There will be AI bots present in some multiplayer matches. One example of this is the Fighter Squadron gamemode, which will feature ten AI players on each team, these bots will act similarly to the ones found in Titanfall. Players will have access to a variety of in-game weapons, though DICE hasn’t released a specific list.

Aside from that, we don’t have an exact date for the beta, we just know that it is coming early next month, ahead of its release at the end of November.

KitGuru Says: The Star Wars Battlefront Open Beta kicks off in exactly two weeks time! Will any of you be trying it out?

Previous Bioshock for iOS is no longer available, even if you bought it
Next Samsung is launching a new, cheaper GearVR this November