Watch Dogs closed beta shows up on Xbox One marketplace

It looks like Ubisoft might be holding a closed beta test for Watch Dogs before its release on the 27th of May as according to Eurogamer, a closed beta listing for the game has been spotted by numerous sources on the Xbox One’s Live marketplace.

However, the beta listing was obviously a mistake as it left out key details such as a release date or even a method of signing up. A Reddit poster did take a picture though, showing that the file size will come in at a hefty 23.07GB and support up to eight players in multiplayer mode through Xbox Live. 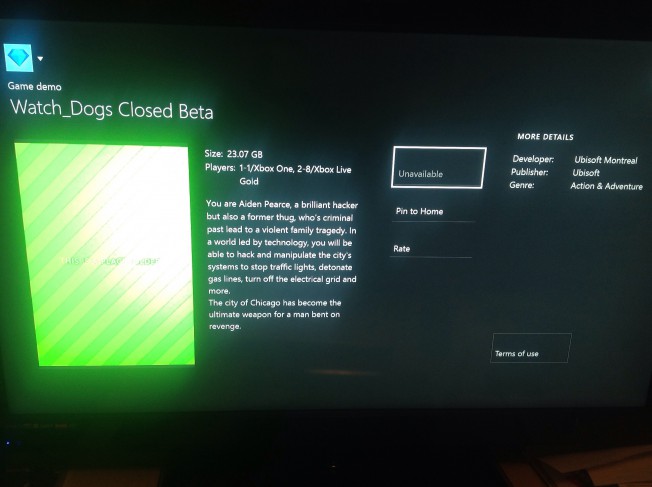 The beta’s description reads: “You are Aiden Pearce, a brilliant hacker but also a former thug, who’s criminal past lead to a violent family tragedy. In a world led by technology, you will be able to hack and manipulate the city’s systems to stop traffic lights, detonate gas lines, turn off the electrical grid and more. The city of Chicago has become the ultimate weapon for a man bent on revenge.”

The game has two confirmed multiplayer modes, one involves people randomly popping up in your game unannounced and messing with you, while the other is a full on open world mode with up to eight people in the world with you. Ubisoft has yet to comment on the beta’s existence.

KitGuru Says: A closed beta test has likely been put in place for in-house testers to pick up on any last minute game bugs leading up to release and wasn’t supposed to draw public attention, an open beta or public beta is unlikely to happen.