PC gamers weren’t impressed when Batman: Arkham Knight launched on the PC a few months ago. Warner Bros  has been pretty quiet on the subject in recent weeks but it looks like the next patch for Arkham Knight is set to feature some pretty important fixes.

The new patch for Arkham Knight is expected to release some time in September. However, for some reason, the patch was accidentally released early last night, giving us a look at the changes coming ahead of time. The most important of which is a much improved options menu. 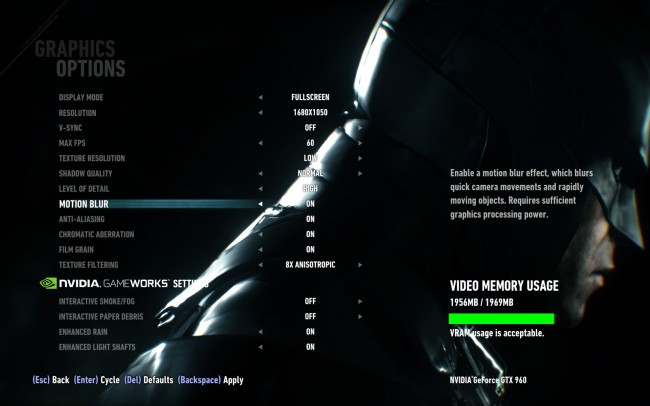 Those who did get the patch before it was pulled had mixed reports. Some reported much improved performance, while others were still experiencing hitching issues. One thing everyone seemed to agree on though, is that the options menu itself is a lot better.

It is important to remember that this patch isn’t finished yet, hence why it was swiftly pulled. Additionally, September’s patch is set to be the ‘interim patch’, before all of the final fixes come later on in the year, likely some time in October.

KitGuru Says: The options menu itself is looking much better already. We just published our look at the Metal Gear Solid V PC port last night, would you like to see us revisit Arkham Knight once all of the important fixes are implemented? Are any of you still waiting to play it?