Microsoft has launched the ultimate game sale on Xbox Live, bringing discounts on many Xbox One and Xbox 360 titles, giving Xbox gamers the chance to save up to 85 per cent on some games. Those who have an Xbox Live Gold subscription will get an extra 10 per cent off too. 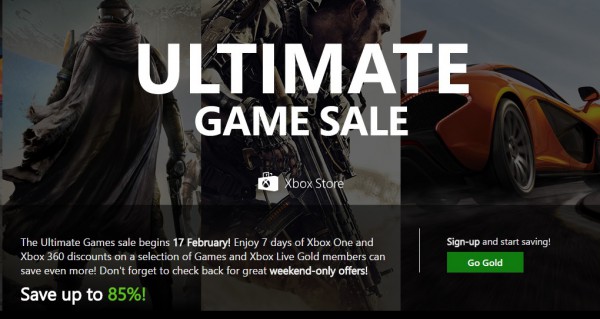 There are a few weekend specific deals as well, with discounts on the Halo Master Chief Collection and Shadow of Mordor season pass for the Xbox One and Fable Anniversary, Naruto Storm Revolution and Dragon's Dogma on the Xbox 360.

You can see the full list of games on sale, HERE.

KitGuru Says: Console gaming has always been significantly more expensive than PC gaming. However, over the last couple of years Sony and Microsoft have been making more of an effort to have regular sales to close the gap. Some of the prices over on the Xbox store are fairly good. Do any of you guys own an Xbox One? Is there anything you might pick up in the sale?