EA and Visceral Games are taking a different approach to Battlefield Hardline, rather than having a “beta test” two weeks before the game’s launch, they are holding a real beta test and its already live. The Battlefield Hardline beta launched last night at the end of EA’s otherwise somewhat underwhelming conference.

The game isn’t due to launch until the end of October this year so the fact that they are holding a beta test this early shows the developer’s commitment to fixing the product before release. It is a closed beta so you’re going to have to sign up, which many have been having trouble with as the servers were completely flooded immediately after the E3 announcement. 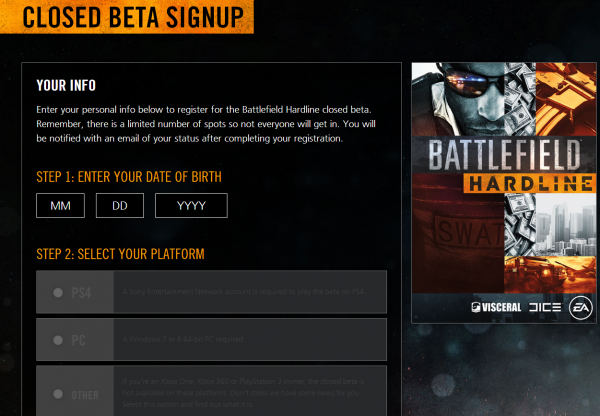 The beta is exclusive to PC and Playstation 4 for now but EA has hinted that an Xbox 360, PS3 and Xbox One beta could be on the way at a later date. Steve Papoutsis, Visceral Games’s VP and GM explained the idea behind Battlefield Hardline:

“This is an awesome opportunity to take one of gaming’s most exciting franchises in a new direction. The cops and criminals fantasy is a great new backdrop for Battlefield and allows us to introduce an impactful story, while still maintaining that intense multiplayer action that fans expect. Best of all, the beta allows lots of fans to jump in and play immediately.”

KitGuru Says: Launching the beta this early was smart, hopefully this will keep the game from being a mess on release. The PC gamers should also be pleased as EA hasn’t excluded them from this. I’m actually looking forward to this one, I’m getting bored of military shooters, cops vs robbers seems like a nice change of pace. Are you guys going to sign up for the Battlefield Hardline beta?

Previous Win prizes with Gigabyte, including Z97X-SOC motherboard!
Next This 370-inch TV costs more than most houses