Though the game released initially to very little fanfare, Fallout 76 has continued to be consistently updated, bringing the game much closer to a traditional Fallout experience. With Microsoft’s recent acquisition of Bethesda, it seems that not much has changed in that respect, with the team now outlining its entire 2021 roadmap.

Making the announcement on its website, Bethesda Game Studios said “Over the years we’ve made a lot of changes and additions to Fallout 76 to continually improve your experience, and 2021 is no different! We continue to build onto Fallout 76 and introduce all new ways to play!”

Fallout 76 is set to receive 4 major updates, each neatly fitting into the four yearly seasons. Spring will bring with it “S.P.E.C.I.A.L. Loadouts, C.A.M.P. Slots, Mannequins, and an all-new Daily Ops expansion”. Other additions include the return of Armor Ace, “this time in a fierce battle against Commissioner Chaos and the Yukon Five!”

This Summer will see the release of the Steel Reign update, which “concludes the story of The Brotherhood, introducing all new quests, locations, NPCs, and powerful new rewards. Whose side will you take? Your choices will change the Wasteland. To survive the Wasteland, you need good gear! This summer, craft specific Legendary items using Legendary modules. Tailor your build to perfect your playstyle.” 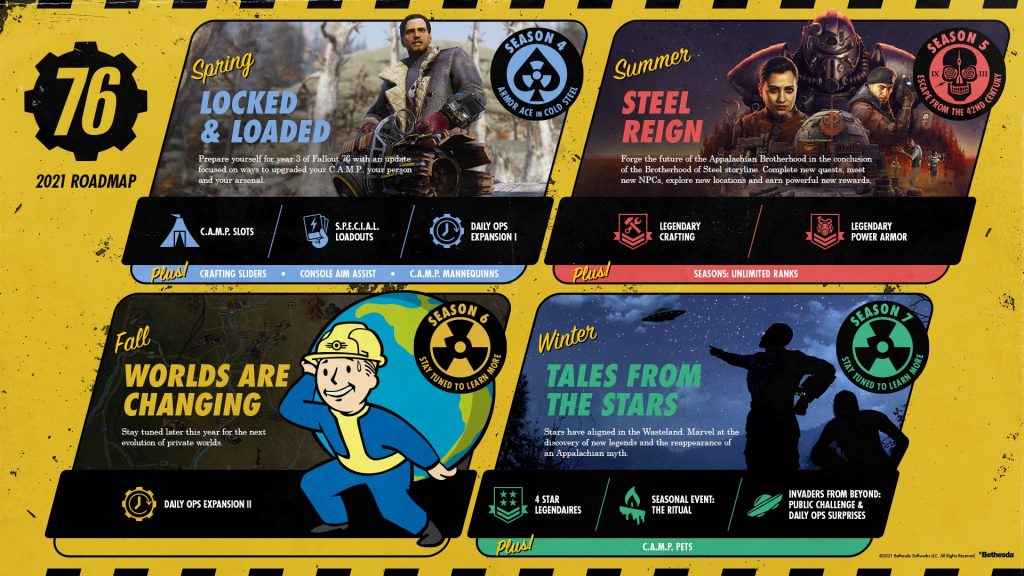 Autumn will see “an evolution to Private Worlds!” although not much else was stated, with the team telling fans to “stay tuned to future Inside the Vault articles for more information as we get closer to release. We’re also bringing another expansion to Daily Ops to bring you even more ways to play.”

Finally, the Winter update will let you “Gear up with all new four-star Legendary Weapons and Armor! Then, after you’ve spent a long day out foraging in the Wasteland, come home to your very own C.A.M.P. Pet!” Other additions will include an all-new event, public challenge, as well as a new seasonal event known as ’The Ritual’.

All in all, none of these updates appear to be fundamentally changing Fallout 76. But for fans of the game, there will be plenty of new things to do in the world of Fallout throughout 2021.

KitGuru says: What do you think of this roadmap? Is there enough there? Has Bethesda redeemed Fallout 76 in your eyes? Let us know down below.