Each month, Sony offers its PlayStation Plus subscribers two free PS4 games to purchase and download for free. July 2020 marks the service’s 10th anniversary, and so in celebration, all subscribers are being gifted an extra third game for free. The free games for the month of July include heavy hitters such as NBA 2K and Tomb Raider.

The first game on offer is NBA 2K20. Described as “a platform for gamers and ballers to come together and create what’s next in basketball culture,” NBA 2K20 is the latest game in Take-Two’s long-running and highly successful basketball franchise. If you’re a fan of the sport, then you most likely already own the game, but even if you’re not very familiar with Basketball, the title’s “MyCareer” story-mode is definitely worth giving a go.

The second game on offer is Rise of the Tomb Raider: 20th Anniversary Edition. The second title in the rebooted trilogy, Rise of the Tomb Raider once again stars the iconic Lara Croft as she “uncovers an ancient mystery that places her in the crosshairs of a ruthless organization known as Trinity”. Featuring satisfying gameplay and impressive setpieces, the game received high praise from both fans and critics alike. 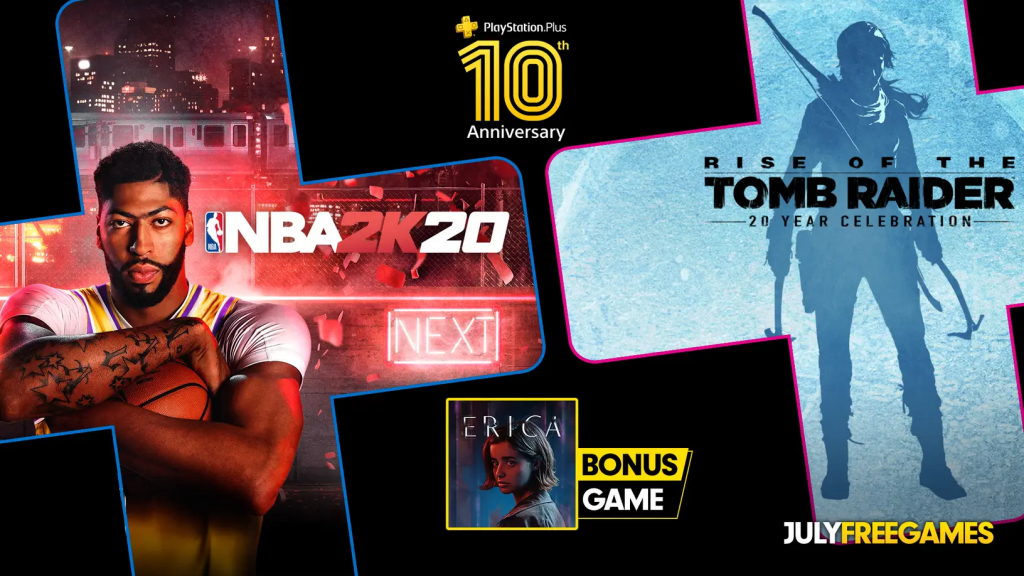 The bonus title on offer for PlayStation Plus’ 10th anniversary is Erica. This narrative-driven FMV “feature-length cinematic experience” merges “high-fidelity Hollywood production values with engaging, tactile gameplay”. You play as Erica, “a brave young lady plagued with nightmares of your father’s murder. With the traumatic events that have haunted you as a child dragged back into the light of the present-day vis grisly new clues, it’s up to you to unearth the shocking truth behind this devastating tragedy.”

Alongside these three games, PS4 owners can get their hands on a PlayStation Plus 10th anniversary theme – though it will only be available for a limited time.

All three of these PS Plus titles are available to purchase for free from now until the 3rd August, and can be found HERE.

KitGuru says: What do you think of this month’s offerings? What game interests you the most? What has been your favourite PS Plus offering of all time? Let us know down below.