Microsoft is continuing to offer to its Xbox Live Gold and Game Pass Ultimate subscribers a number of free games each month. The month of April is looking good for anyone who is a fan of racing games or RPGs, as Project Cars 2, Fable Anniversary, Knights of Pen and Paper Bundle, and Toybox Turbos are all up for grabs. These games will become available throughout the month for subscribers to purchase and download.

Available from the 1st of April to the 15th is Fable Anniversary. Originally an Xbox 360 title, but playable on Xbox One through backwards compatibility, the game is a remaster of the classic action RPG, featuring “all new textures, models, and lighting, used to retell the story of the pioneering game where every character choice has a direct consequence. This is the definitive Fable experience for faithful fans and new players alike.”

Available from the 16th to the 30th is another Xbox 360 title. Toybox Turbos is a tabletop racer which allows you to “collect and customize 35 vehicles on 18 crazy tracks”. The game is described as “the perfect family game for those competitive ‘just one more’ sessions.” 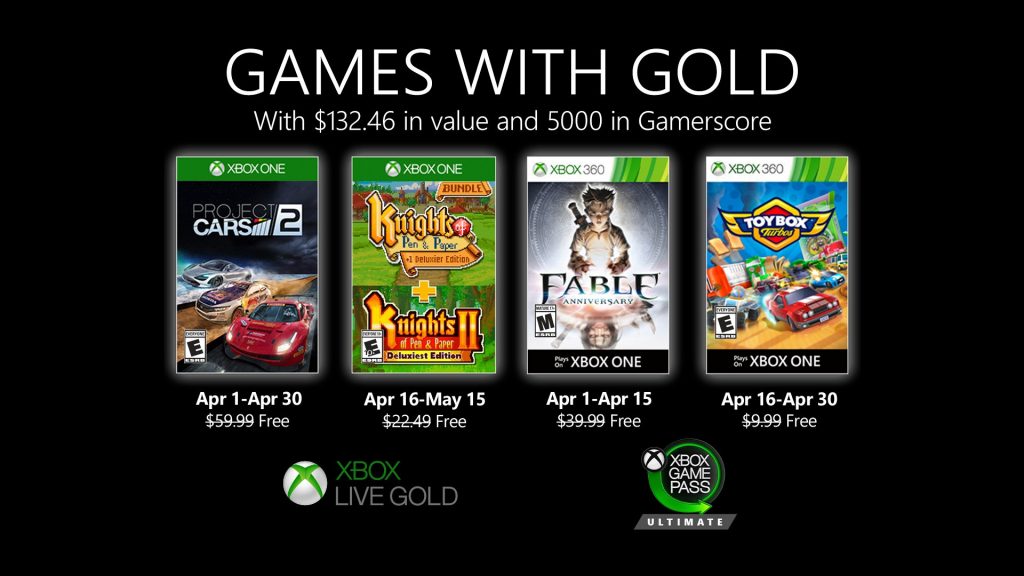 Available throughout the entire month of April is Project Cars 2. The sequel to 2015’s racing simulator has “over 180 elite vehicles available for your choosing to compete on a variety of track surfaces including ice, dirt, and mud”. The game remains authentic through its use of “dynamic weather physics on 140 tracks, true-to-life handling, and multiple game modes” and continues in the footsteps of its predecessor in creating the “the ultimate driver journey.”

The final game on offer is Knights of Pen and Paper Bundle. This collection gives you the ability to “inhabit a world of chivalry, class warfare, and semi-appropriate cultural references”. Attempting to recreate the feel of classic pen and paper RPGs, with “none of the lost dice,” Knights of Pen and Paper Bundle is available between the 16th of April and 15th of May.

KitGuru says: What do you think of this month’s offering? Which game entices you the most? Do you appreciate Microsoft continuing to offer Xbox 360 titles or should they focus on more modern games? Let us know down below.

Previous Samsung switches focus from LCD to AMOLED and QLED
Next Half-Life: Alyx Source 2 level editor is being worked on now