As March quickly approaches, Microsoft has announced which games are set to be gifted to all Xbox Live Gold subscribers. As usual, four games will be offered – two Xbox One titles, and two Xbox 360 titles (available on Xbox One through backwards compatibility). This month’s offerings are Batman: The Enemy Within, Castlevania: Lords of Shadow 2, Sonic Generations, and Shantae: Half-Genie Hero.

Batman: The Enemy Within is the second season of the Batman Telltale series. One of the final games to be developed by the original incarnation of Telltale Games, it saw you “[r]eturn to the streets of Gotham and punish the criminal element”. Playing as both Bruce Wayne and Batman, “you’ll need to navigate uneasy alliances while undertaking a perilous series of deceptions. With the return of the Riddler to terrorize the city, and an even larger threat on the horizon, how deep into the darkness will Batman descend?” The game saw mixed reviews from episode to episode, though overall it was viewed favorably by critics. Batman: The Enemy Within will be available from the 1st to the 31st of March for Xbox One.

Castlevania: Lord of Shadows 2 is a fantasy action-adventure hack and slash game. Set 1000 years after the first title, and “[w]eakened and yearning for release after centuries of sleep, help Dracula return to his famous castle to regain his old powers to defeat Satan. Taking place in both medieval and modern times, the final dramatic showdown between good and evil begins, in this epic open-world adventure”. Castlevania: Lords of Shadow 2 will be available from the 1st to the 15th of March on Xbox 360 and Xbox One. 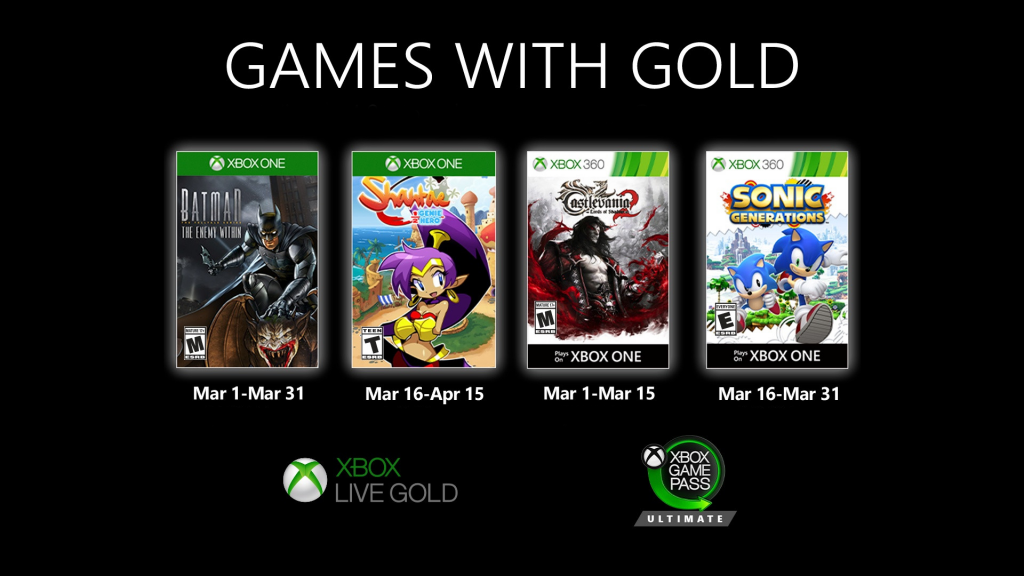 Sonic Generations was created to celebrate Sonic’s 20th anniversary and so is a game which features the best that Sonic has to offer. With a mix of modern and classic Sonic, 3D gameplay and 2D side scrolling, and old and new locations, the game truly is a celebration of everything Sonic. Though the blue blur has had an inconsistent reputation over the years, Sonic Generations was received positively by both critics and fans alike. Sonic Generations will be available from the 16th to the 31st of March for Xbox One and Xbox 360.

Shantae: Half-Genie Hero is a modern 2D platformer and the 4th entry in the long running series. “There’s a mysterious crime spree sweeping Sequin Land, and only Shantae can save the day! Send monsters flying using Shantae’s devastating Hair-Whip Attack or transform into powerful creatures using her magical Belly Dance. Defeat the masterminds behind each caper and faceoff against her ultimate nemesis, the bodacious buccaneer Risky Boots!” Shanate: Half-Genie Hero will be available from the 16th of March to the 15th of April on Xbox One.

KitGuru says: What do you think of March’s offerings? Which title interests you the most? What’s your favourite Castlevania game? Let us know down below.