Another day, another leading public figure who's calling for the breaking of encryption so that it can effectively track terrorist organisations. This time it's the head of the FBI, James Comey, who said that his policing agency needed a “backdoor” to encryption standards so that the FBI could track the communication of those that are part of ISIS.

Much like those who have railed against encryption before – like David Cameron – Comey's language appeared to be deliberately appealing to antagonistic emotions, suggesting that by allowing encryption to exist we were letting influencers tell potential ISIS recruits to “kill, kill, kill, kill.” As it stands he said, the FBI can disrupt, but cannot stop ISIS plots.

“I am not trying to scare folks,” he said. 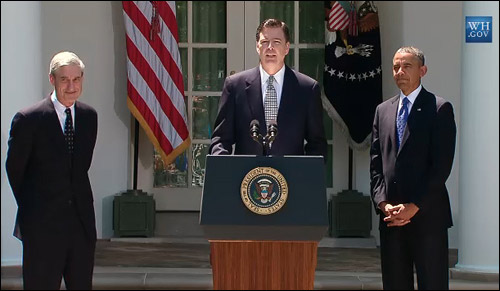 As the Guardian points out, he went on to suggest that encryption sends us down a difficult path, where the FBI would be unable to protect citizens from the actions of nefarious individuals. However this is almost entirely opposite to the argument given by technical experts. They claim that if encryption standards were fundamentally broken, or had a system that would allow for its bypassing, hackers and other nations would be the first to exploit it.

Comey's response was that the bright minds at tech companies should invent a new encryption standard that could be monitored by law enforcement, but also not have invariable security problems. It's not clear if anyone suggested that such a standard would simply not be adopted by anyone, ISIS included.

However Comey may find an unlikely ally in the Chinese government. It too made a recent push for better control of its digital networks, including the possibility that all companies that use encryption would need to provide decryption keys to government officials.

KitGuru Says: You would think that for all of the Western world's condemnation of China, with its censorship and human rights abuses, that they would see the similarities between their own actions and the Eastern nation. If they do, they don't seem to care.