LeakedSource, a for-profit database of hacks and security breaches has been taken down this week, leading to reports of an FBI raid, during which all servers are said to have been seized. News of the raid first broke last night and while the US authorities have yet to confirm or deny that the raid took place, the site is currently closed for business.

News of the raid started making the rounds last night, with ZDNet pointing to a now deleted note posted on the virtual markets forum as evidence. The note reads: ” Sorry for all you kids who don’t have all your own Databases. Leakedsource is down forever and won’t be coming back. Owner raided early this morning. Wasn’t arrested, but all SSD’s got taken, and Leakedsource servers got subpoena’d and placed under federal investigation. If somehow he recovers from this and launches LS again, then I’ll be wrong. But I am not wrong. Also, this is not a troll thread. ” 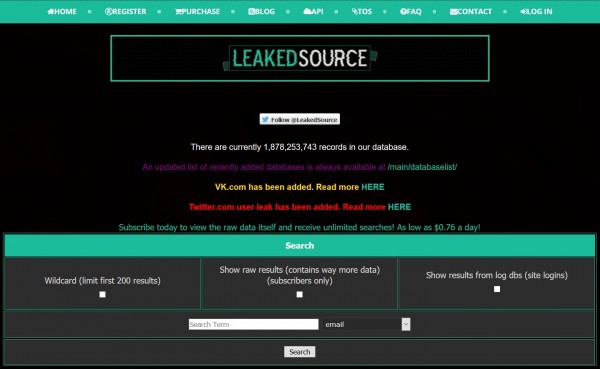 The location of LeakedSource’s owner is not known, so their arrest status can’t be verified at this time. However, it sounds like the site rustled quite a few feathers. This investigation into LeakedSource likely kicked off last year, when the site became well known for providing certain people access to huge data breaches, which included companies like Twitter and Yahoo.

LeakedSource would sell access to its database for as much as $2 a day, or $265 per year.

KitGuru Says: While we don’t have the full story behind what is going on here just yet, it does seem that LeakedSource won’t be returning anytime soon.