There is a Battlefield Beta phishing scam doing the rounds

EA has committed itself to having public beta tests following on from the launch issues of Battlefield 4 and this year's Battlefield will be no different. However, if you are interested in signing up for the beta, it is important that you do so through the official site as there are some convincing looking Battlefield Beta phishing sites doing the rounds.

Battlefieldbeta.com is a fake site that is not owned by EA or DICE and as such, is not an official source. It looks almost exactly the same as the official Battlefield Beta registration page, so it is quite convincing. At first you will see a ‘Become a Battlefield Insider page', from there you will be asked to register your email address on a page that is actually not present on the official EA website. If you end up going through all of the fake registration steps, you end up at a survey page, at which point you will probably realise the whole thing was a scam. 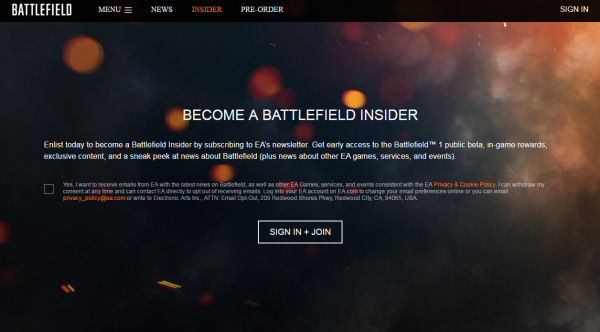 The biggest giveaway here is that the font is slightly off for the links at the top.

The fake site was brought to our attention by user Locknlawl on Reddit. You can report the fake page as a phishing scam to Google by using the link, HERE.

If you do want to sign up for the Battlefield 1 beta, you can do that safely and officially, HERE.

KitGuru Says: With a domain name like Battlefieldbeta.com and some fairly convincing imagery, it could be easy for someone to mistake the site as something official at first. Hopefully if the word gets out and enough people report the link, this particular site won't be an issue for much longer.