Huawei will debut the Nova 4 later this month, featuring a cutout selfie camera

Samsung debuted its Infinity O panel last month, expected to eschew the notch in favour of a “hole punch” cutout on the Galaxy S10 next year. It seems as though Huawei is once again keen to beat the South Korean manufacturer to the punch, pegged as the first to release the technology in the Nova 4 later this month. 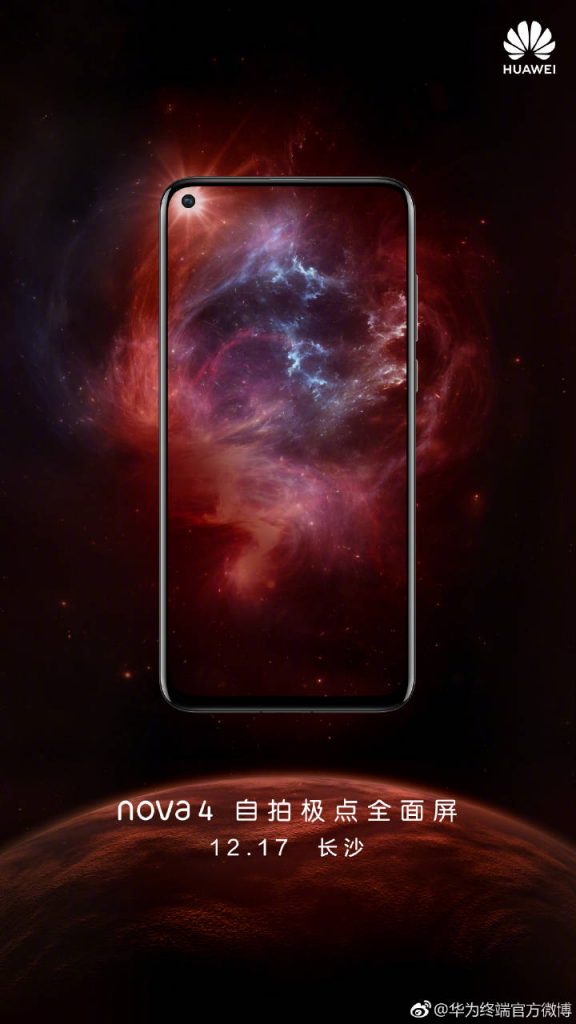 Its official name was accompanied by a December 17th launch date and a near bezel-less frame featuring a small cutout in the top left corner. The very same cutout was first expected to appear on Samsung’s Galaxy S10 and the A8s in February, 2019, however competition is still heating up between the two as the Chinese manufacturer will seemingly reach consumers first.

Not much is known about the Nova 4 beyond the above image. While Huawei often treats its Nova series to upper mid-range specifications, the company has recently taken to besting its previous flagship offering. Just as the Mate 20 Pro beat the P20 Pro from earlier in the year, the Nova 4 could house a Kirin 980 of its own. Still, we won’t know until December 17th finally rolls around.

Elsewhere, Lenovo is also reportedly planning to release a handset featuring a cutout, with other manufacturers sure to follow suit in the same fashion as the divisive notch. While Huawei seems to have won this round, the battle continues as the two duke it out to release their foldable smartphone first.

KitGuru Says: I’m not a particular fan of the cutout, but I have to admit that it’s perhaps a better solution than the intrusive notch. Fortunately for those against the new feature, these trends are seemingly passing over relatively quickly. How do you feel about the incoming cutout?