Premature listing suggests price and specs of the OnePlus 7

OnePlus is gearing up to launch its next flagship smartphone, meaning a number of details are coming to light. CEO Pete Lau has already confirmed that the OnePlus 7 won’t feature wireless charging and leaks suggest a bezel-less design thanks to a pop-out camera, but a recent listing reportedly uncovers what’s under the hood and just how much it’ll cost.

Handset retailer Giztop prematurely listed the OnePlus 7 on its site, revealing a Snapdragon 855 processor and up to 12GB RAM and 256GB of storage. This is supposedly powered by a sizeable 4,000mAh battery that uses Dash Charging to speedily replenish.

The AMOLED screen itself is said to be 6.5-inches with an in-display fingerprint scanner. The triple-camera setup on the rear supposedly consists of a 48MP, 20MP and 16MP lens, while the pop-up camera will reveal itself via a mechanism, exposing a single 16MP lens. The listing also states that the device will unsurprisingly be running on the latest Android 9 Pie operating system starting at $569. 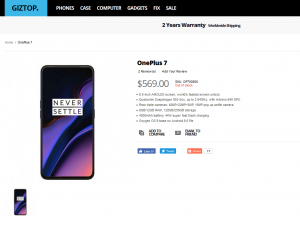 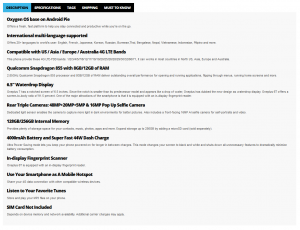 Display size and SoC have remained consistent against prior speculation, but the retailer’s listing suggests a slightly smaller battery than previously expected, although still larger than its predecessor. There are also discrepancies with the images used. The ever-reliable OnLeaks unveiled renders earlier this week that show two buttons to the right, likely consisting of a power button and alert slider while a volume rocker sits on the left. The reverse is true for Giztop’s pictures, which forgo the alert slider and partition the volume rocker into two distinct buttons.

We’ll surely be treated to more information in the run-up to release, but for now it’s best to take Giztop’s listing with a pinch of salt.

KitGuru Says: It’s good to see OnePlus managing to keep costs down, if the price is to be believed. Would you pay $569 for a device with the specs outlines above?