Samsung has had almost all of its secrets uncovered in the run up to its still-unannounced Galaxy S9 handset, and now it seems that benchmarking details have also been spoiled. If proven true, Samsung’s proprietary international processor will be more powerful than most Android handsets throughout 2018.

As always, it started with a leak of Geekbench scores for Qualcomm’s upcoming Snapdragon 845 version of the Samsung Galaxy S9 device, which was confirmed by other Snapdragon 845 benchmarks circulating the web.

Shortly after that, Geekbench was hit with yet another leak, this time concerning Samsung’s Exynos 9810 processor that will be housed in the international versions of the Galaxy S9. This saw the chip being significantly more powerful, leaning closer to Apple’s A11 Bionic than the Snapdragon 845.

Considering the majority of flagship handset throughout 2018 are set to house Qualcomm’s latest Snapdragon processor, this could very well mean that Samsung’s Galaxy S9, with the S9+ version in particular, blows them out of the water. 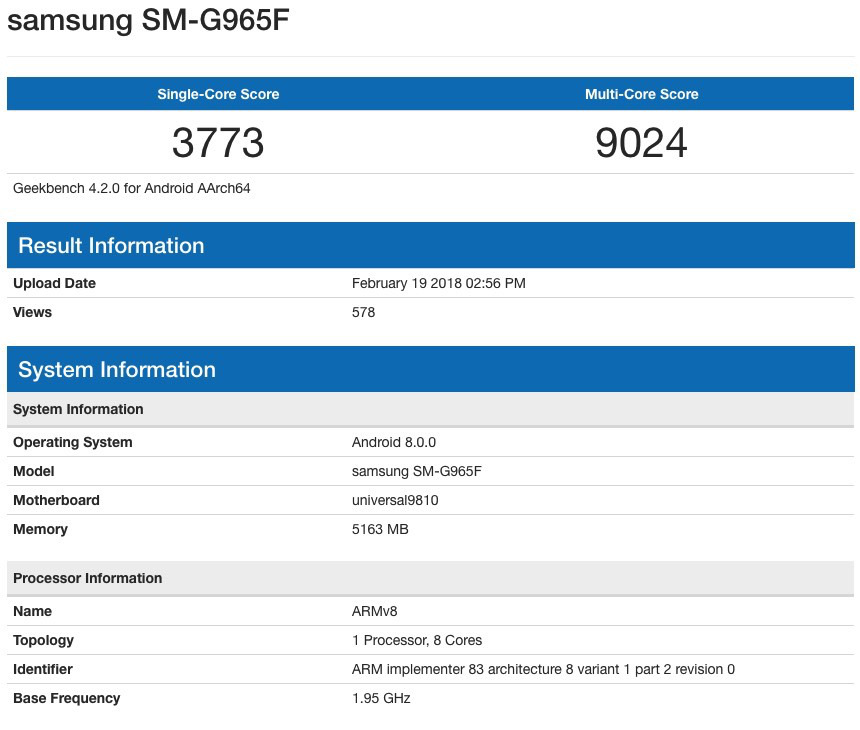 Surprisingly, the Galaxy S9 benchmark shows the device at 3396MB RAM (approximately 3GB) which is relatively low for a flagship handset going into 2018. The Galaxy S9+ supposedly improves on this by adding an extra 2GB on top, totalling 5163MB (5GB).

With the iPhone X and iPhone 8 still reaching respective scores of 4,200 and 10,000 in Geekbench, Samsung is still playing catch-up, but its Galaxy S9 series of devices is the closest it’s been in a long time, and so far the closest of any Android handset, provided that you’re from anywhere other than the United States.

KitGuru Says: It’s not long now until Samsung will officially unveil its flagship smartphone and all rumours will, likely, be confirmed. What are you most looking forward to about the Samsung Galaxy S9 and S9+?