Google has been preparing its second attempt at breaking in to mobile payments following the success and adoption of Apple Pay. Google’s new implementation is called ‘Android Pay’ and it is launching today in the US, with support for phones running Android 4.4 KitKat and above.

The new app will start going out to users slowly and throughout the next week, devices with NFC support and Android 4.4 or above should be able to use it. If you have Google Wallet installed, that will soon be updated to Android Pay instead to keep everyone using the same app. 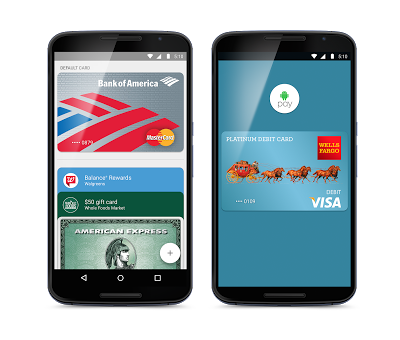 Google Wallet isn’t completely dead though, it has been re-purposed as an app for sending money to family or friends, rather than buying things at stores. Just like Apple Pay, the contactless payment system uses your smartphone to pay for items, using stored bank card information.

Since Apple Pay and Android Pay use the same technology, the option to use it should be readily available at plenty of places. At the moment, this is all US only but if Android Pay does land in the UK, it will be subject to the same £30 contactless payment limit as Apple. Though those rules may change at some point.

KitGuru Says: While Google attempted to make this payment system happen years ago with Google Wallet, it didn’t really take off and receive wide-spread adoption until Apple stepped in. Have any of you used NFC to pay for something with your smartphone before?