HTC One KitKat update suspended in the UK

HTC began rolling out Android 4.4.2 to UK based HTC One owners last week but unfortunately, thanks to bugs in the update, the rollout has been temporarily suspended while the Taiwanese phone maker irons out the unforeseen issues.

The company didn’t tell us exactly why the update was pulled, instead it opted to send out this tweet: “We’re aware that some users are having issues with the 4.4 update. As a result, all updates have been temporarily suspended.” However, Android Central did manage to get an official statement, but it didn’t really offer any new information: “We are aware that a limited number of HTC users are experiencing difficulties with the KitKat update. As a result, all FOTA updates have been temporarily suspended. HTC is committed to providing customers with the best possible mobile experience and we are working hard to resolve the issue quickly.” 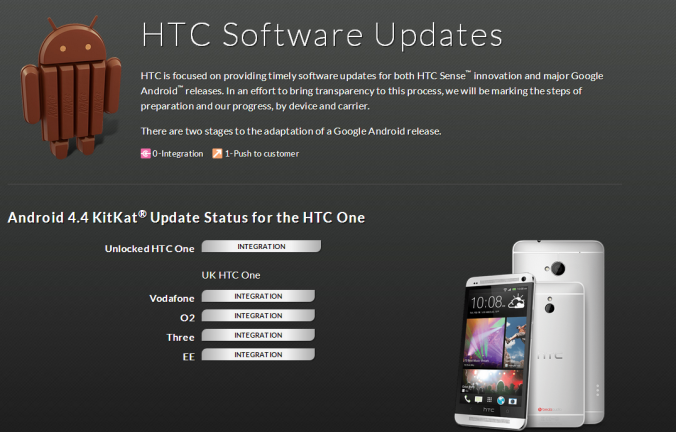 On the phone’s official software upgrades page, the HTC One is shown as being in the integration stage of KitKat on all carriers as well as the unlocked device. This isn’t the first time an Android update has had to be suspended, last year Samsung faced the same problem when rolling out Android 4.3, users were experiencing all sorts of problems including massive battery drain.

KitGuru Says: It would be nice if one day we could live in a world where all Android phones updated at roughly the same time and were universally kept up to date, much like the Nexus line. Unfortunately, while phone makers have been getting better at bringing out timely updates, it’s still not quite good enough.