Samsung’s and SK Hynix’s first LPDDR4 chips operate at 3200Mb/s effective clock-rate and have 8Gb capacity. The new LPDDR4 interface will provide 50% higher performance than the fastest LPDDR3 or DDR3 memory that are used today; besides, LPDDR4 consumes approximately 40% less energy at 1.1 volts (compared to LPDDR3), according to Samsung. The new memory dies can be stacked up and provide not only speed, but also up to 4GB of capacity for mobile devices.

“The challenge is how to achieve that energy reduction at 3200Mb/s, and the sub-committee had to look at architectural, signaling and voltage changes,” said Hung Vuong, chairman of JEDEC’s JC-42.6 subcommittee for low power memories, in an interview with EETimes-India. “The objective is to improve timing closure, as well as reducing internal DRAM die power.” 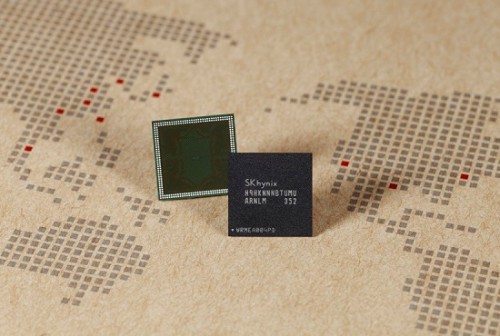 “Our goal was to double the bandwidth performance, but also we took a much harder look at the power usage,” said Dan Skinner, director of architecture development at Micron Technology and a JC-42.6 Subcommittee member. “Once [desired] performance level is reached, then doing so at the best power point is the top priority.

Memory bandwidth is needed in mobile devices as they gain performance in graphics processing amid increasing resolution of displays on tablets and smartphones. In order to render graphics comparable to Unreal Engine 3-based Infinity Blade 3 game for Apple’s iPad and iPhone, a lot of graphics processing horsepower is needed. Rendering in high resolutions requires high memory bandwidth.

Pure performance is not the only thing that the next-generation mobile memory standard brings. High data rate enables mobile devices makers to simplify their designs. Smartphones and tablets that are based on Qualcomm’s latest Snapdragon 805 application processor will have to rely on quad-channel memory interface and LPDDR3 type of memory to get up to 8.5GB/s maximum bandwidth for the application processor, which is a data rate comparable to modern mainstream PCs. With LPDDR4, such memory bandwidth could be achieved in dual-channel mode, which results into much less expensive designs and devices.

The LPDDR4 standard is expected to be formally finalized in 2014. The new type of memory is projected to be used inside flagship mobile devices at the end of 2014 and is anticipated to be commercialized regularly from 2015, according to SK Hynix. The fourth-generation mobile DRAM standard is believed to become mainstream type of memory for mobile devices starting from 2016, the DRAM company claims.