Apple is finally pushing out its OS X Yosemite update to the public, featuring better power optimizations and major updates to all first party apps, including Safari, iTunes and the iWorks suite. A new version of OS X also means a new line of Macs, here is what Apple has in store for us today:

Starting off with the iMac, the famous all in ones will now come equipped with retina displays and the rumors were absolutely true, the highest end 27 Inch model will feature a 5K resolution, that's seven times more pixels than a HD TV and 67 per cent more than a 4K display. The screen comes in at just 5mm thick and comes equipped with an Apple designed timing controller, which helps raise backlight energy efficiency by 30 per cent. 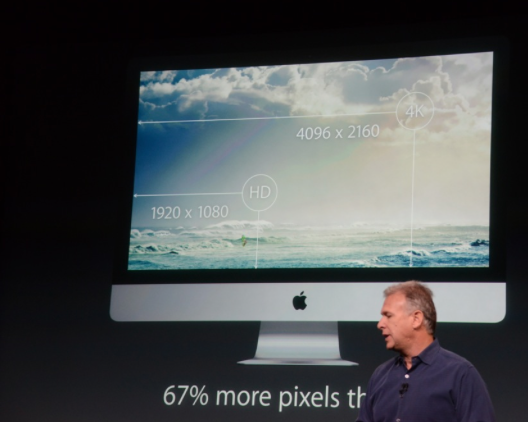 Powering the 5K iMac will be a 3.5 GHz Intel Core i5 CPU but you can upgrade this to a 4GHz Core i7. Graphically, Apple went with AMD's R9 solution this time around, more specifically, the R9 M290x. Thunderbolt 2 and a 1TB fusion drive will now come standard in the iMacs.

Additionally, the Mac Mini is getting an upgrade, with a new 4th generation Intel CPU, PCIe based SSDs, support for 802.11AC WiFi and two Thunderbolt 2 ports, these come in pretty cheap, starting at $499.

There were no new Macbook Pros or Macbook Airs announced today, unfortunately. This is likely down to the fact that Intel can't supply enough Broadwell CPUs yet, so Apple is forced to wait a while before refreshing the lineup.

KitGuru Says: That 5K iMac seems pretty powerful for an all in one machine, particularly if you upgraded to a 4GHz Intel Core i7. What do you guys think about Apple's jump to 5K?