Home / Lifestyle / Mobile / Apple / MacBook Pro with Touch Bar is near impossible to repair, no room for upgrades

MacBook Pro with Touch Bar is near impossible to repair, no room for upgrades

As interesting as the new MacBook Pro is, particularly the Touch Bar model, it seems that Apple has made things under the hood more complicated than ever before, making the laptop practically impossible to effectively repair. The new design changes also make upgradeability of system RAM or the SSD impossible, forcing you to pay Apple’s premium memory and storage prices upfront.

This week, teardown specialists, iFixit, released their assesment of the new MacBook Pro with Touch Bar, giving it a 1/10 repairability rating. It also revealed a few other unwanted design changes, like the fact that the laptop’s two speaker grilles are actually just for show as neither of the speakers are located near them. Instead, these speakers likely direct their sound through the side vents of the laptop. 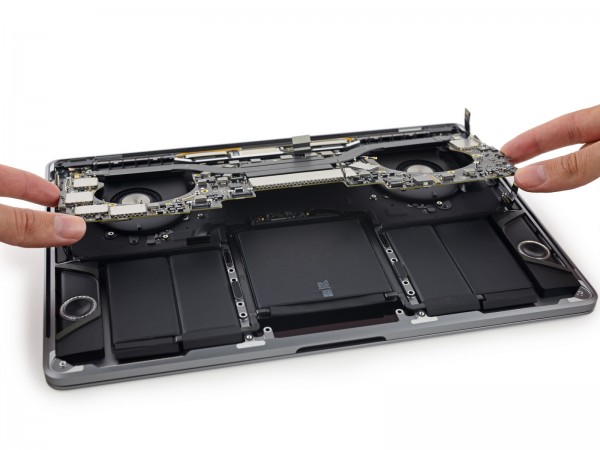 While past MacBook Pro’s have allowed users to replace the RAM and SSD, this time around all of the components are soldered directly to the logic board and the battery is glued to the case. This makes upgrades impossible, meaning you will have to pay Apple’s £180 price tag for 16GB of RAM, or pick up a more expensive model entirely for more storage.

A poor repairability score isn’t completely new for the MacBook Pro when it comes to iFixit’s rating system but the lack of upgradeability options does sting a bit with these new models.

KitGuru Says: I bought my MacBook Pro back in 2011 and over time I have upgraded the RAM and switched out the HDD for an SSD to keep the machine running snappy. In all, the upgrades probably cost me less than £100. However, if you wanted to make similar upgrades to Apple’s new model, you would need to do so when you first pick it up and it will end up costing you the better part of £500. It’s a shame Apple values compact design over practicality these days. Still, the standard MacBook Pro with no Touch Bar should still be upgradeable for now.