It seems that claims of the OnePlus 6 potentially following in the footsteps of the iPhone X with its notched bezel-less screen might have some truth in them, as a leaked benchmark shows the device’s 19:9 aspect ratio. It also reveals that the upcoming flagship smartphone will continue the company’s trend in housing the latest chipset.

First published on Android Central under the code-name A6000, the reveal of its 19:9 aspect ratio marks an increase from the OnePlus 5T’s 18:9 display. The extra space is likely to push further up towards the top of the device, lending credibility to its bezel-less design, albeit obscured by the small notch containing the front-facing camera and sensors. 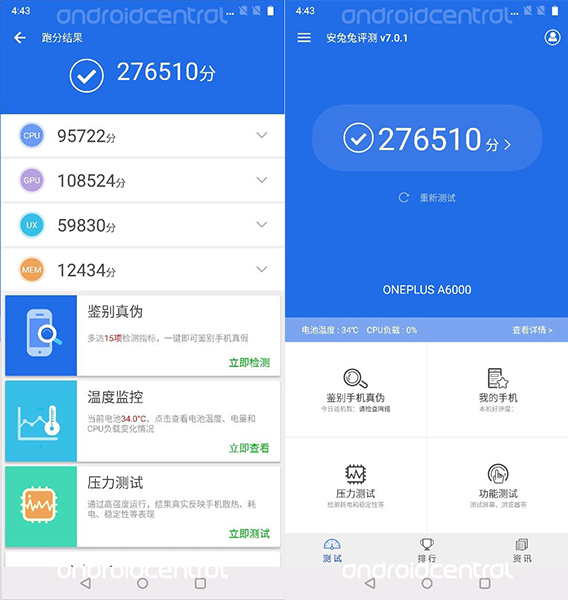 The AnTuTu benchmark details a CPU score of 95,722 and an overall score of 276,510, which bests the previous record held by Xiaomi’s Mi Mix 2S, expected to release later this month. Like the Mi Mix 2S, this implies that the OnePlus 6 will be running Qualcomm’s latest chipset, the Snapdragon 845.

Even without explicitly stating that the Snapdragon 845 is the processor in question, OnePlus CEO Pete Launched has said previously that “there’s no other choice” when asked if the successor to the OnePlus 5T would house Qualcomm’s latest offering.

OnePlus has yet to officially confirm any of the recent leaks, so take this information with a pinch of salt. Official reveals should start taking place in the run up to its expected June reveal.

KitGuru Says: I am still not sure how I feel about the notch, but if OnePlus manages to retain its competitive pricing, it will still have a potential flagship killer on its hands. Are you excited for the OnePlus 6?