Samsung Galaxy S9 might have a front-facing dual camera and 3,200 mAh battery

Samsung has launched its budget Galaxy A8 and A8 Plus handsets, bringing some of the more premium features into more affordable devices in January. The choices that Samsung has made on these handsets, however, give insight into what we can expect for the flagship Galaxy S9 and its big brother, the Galaxy S9 Plus.

The Samsung Galaxy S9 series has received a lot of attention lately, with leaks and rumours giving us a look into what we can expect. Unfortunately, it looks like the company decided to opt out of a significant redesign in favour of an iterative design that echoes the Galaxy S8 series.

Of course, the Galaxy A8 line also takes its cues from the Galaxy S8 series by adopting the slim bezel Infinity Display, but there are a few new features on the device too. Notably, the fingerprint scanner has been relocated to below the camera for easier access, echoing the leaked designs of the proposed Samsung Galaxy S9.

In fact, this design seems all but confirmed with the leaked schematics, the renders, the design being applied to the Galaxy A8 line and Chinese microblogging service Weibo seeing an anonymous source post a photo of supposed case designs for the upcoming flagship device.

AdBlock is known to cause issues with out imaging system. Please disable this if you can't see the above pictures.

It also houses a dual front-facing camera, prompting thoughts of whether or not either of the upcoming flagship devices will tout the same feature. It is heavily rumoured that the rear-facing dual camera will be exclusive to the larger Galaxy S9 Plus, while the ordinary S9 will have a single lens, so perhaps it will be the same for the front-facing lens too. So far, the renders don't shot this feature anywhere.

Elsewhere, rumours are cropping up about the proposed battery life of the Samsung Galaxy S9 devices. Tencent Digital News (via BGR) posted a supposed list of specs for the upcoming standard Galaxy S9, albeit in Chinese. While I do not know Chinese, there are notable numbers to focus on, such as 3200. If this is 3,200 mAh for the battery, then the Galaxy S9 will boast a 7 percent increase from the current flagship. 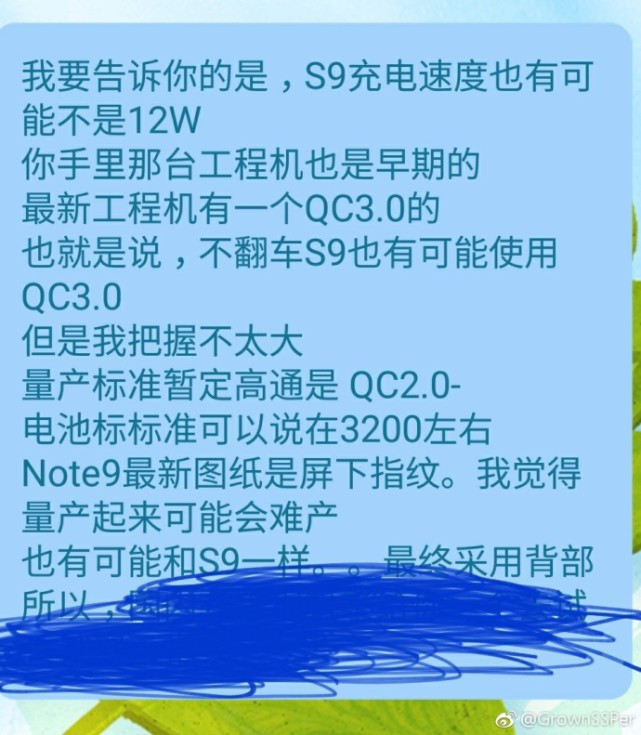 As for the other numbers, QC3.0 looks to be speculating Quick Charge 3.0, however QC2.0 is also stated on the specs list. 12W is likely referring to the faster wireless charging, in which iPhones 8 and up sport 7W.

The Samsung Galaxy S9 is expected to make an appearance in February at the MWC, with reports split on whether the device will launch the following March or later in August due to lack of sufficient competition.

KitGuru Says: The Samsung Galaxy S9 series is shaping up nicely, or at least it is in our heads. The official specs won’t be revealed until a little further down the line so take everything with a pinch of salt. What are you most looking forward to in the new devices? Is there any feature you’d like to see make its way to the handset given the likelihood of a premium price tag?