There have been many leaks and rumours surrounding Samsung’s Galaxy S9 range since the launch of its latest Galaxy S8, however none have been more comprehensive as the past two days. From a number of sources, we get a look at schematic drawings, renders and a possible announcement window for the device.

The schematic drawings first appeared on Chinese social network site, Weibo, showcasing the front back and sides of the supposed Samsung Galaxy S9. The handset will reportedly trim down the bezels to allow for more screen real-estate. The design of the rear camera is vertically-aligned with what could be a fingerprint scanner. To the right of the lens is perhaps where the device will feature its regular heart rate monitor. 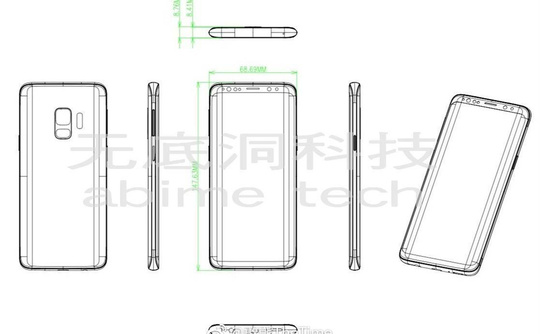 This actually corresponds with Android Headlines’ leak supposedly showcasing the rear in a pixelated photo and confirming that the device will sport a singular lens instead of the trending dual lens feature on other flagships.

Well-trusted leaker OnLeaks, in collaboration with MySmartPrice, echoes these designs in renders of both the Galaxy S9 and the S9 Plus. Again, the Galaxy S9 is expected to sport slimmer bezels, a singular camera, surrounded by features like the fingerprint scanner and heart rate monitor.

Although this does give us a clearer picture of what to expect with the smaller model, the more interesting part lies in the renders of the Galaxy S9 Plus. The renders go on to affirm the rumours that the dual lens camera will exclusively feature on the larger, premium handset, while sporting mostly the same features on the surface as its smaller counterpart.

While speculation surrounds that the Galaxy S9 series will feature a headphone jack, and as such as been included within both the renders and, I think, the schematics, it is not yet confirmed and therefore might not be included in the final design.

Lastly, Korean publisher The Bell has stated that Samsung will unveil is Galaxy S9 line at the MWC in February 2018, however, neither device will be available for purchase until the following August. The reason stated for deviating from its usual plans is that the Samsung Galaxy S8 range is selling well and with no competition from Apple until September 2018, it isn’t in a hurry to show its hand all at once.

KitGuru Says: It’s worth remembering that none of this information is confirmed and therefore should be taken lightly. Are you waiting for Samsung to release the Galaxy S9 or Galaxy S9 Plus before upgrading? What do you want to see in/on the devices?