Although Apple has fallen from its peak tablet market share from 3-4 years ago, it is still the single largest single brand in the market with a constant stream of money and willing App Store customers flooding to its banner/bank. Against that background, what does a local hero need to do in order to make a dent and pick up some change? KitGuru gives a 10-finger touch to the latest specs from PC Specialist.

“It’s a revolution and it’s only just begun”.

Remember that TV advert from the Spring of 2010?

KitGuru heard it loud and clear – and we designed our whole site around the concept that tablets would be huge.

Since the launch of the original iPad, Apple has cast a giant shadow on the global sales figures for tablet products – just check the numbers on this chart (based on data made available by Apple).

Against that kind of onslaught – what can the traditional PC market do?

KitGuru was at CeBIT in 2011 when the airwaves were filled with Steve Jobs’ announcement of the iPad 2 on the other side of the planet. Some of the Taiwanese manufacturers we met with at the show that day were a little distraught. They had spend the previous 12 months creating tablets that were cheaper, heavier, slower and less stylish than the original iPad (and, of course, without the App Store) – only to find out that all of their hard work was for nothing – because the iPad 2 simply blew their designs out of the water.

In order to have any chance of competing, a tablet from the traditional PC market players would need to be pretty impressive.

Half way through 2014, are we starting to see ‘green shoots’ from WinTel?

The 10.1″ Voyager from PC Specialist combines a dual core Intel, 1.6GHz proocessor from Intel with 2GB of main ram and 64GB of solid state storage – as well as HD graphics and audio – and all under a 10 point multi-touch panel for £217.

From our own experience with Nokia phones, we know that the Windows 8/8.1 style interface that has been so lamented on the desktop – actually provides a good touch experience. Also, PC Specialist is offering a 3 year warranty on the hardware itself, which is normally a sign of confidence.

Should Apple shake in its boots?

Maybe not just yet, but the quality and specification being offered in some of these deals is pretty impressive.

Did we mention the detachable keyboard? 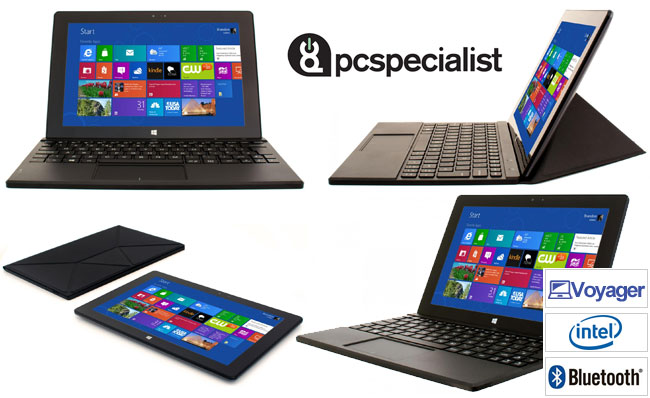 KitGuru says: In a global economy that is still feeling the effects of austerity, having a 64GB option from a trusted local system vendor like PC Specialist that is less than 1/3 the price of a 64GB solution from Apple must create some interest in the market. Surely?

Recently, Apple announced its intentions to reduce its App Store commissions from 30% to 15% …