With the revelations of PRISM and Tempora surveillance that came about last year thanks to the leaks of ex-NSA contractor Edward Snowden, the world at large is aware more than ever that governments are spying on them. One way to make that much harder for them though, is to encrypt your data but that’s never been particularly easy on smartphones, especially with the abundance of privacy stealing apps. Now though, FreedomPop has released the Privacy Phone – affectionately nicknamed the “Snowden Phone” – which combined with the mobile service, offers completely encrypted voice and text communications.

According to the Techcrunch breakdown, the Privacy Phone uses 128-bit encryption for any calls you make or messages you send and if you happen to go online, you’ll automatically be linked through a VPN to protect your anonymity. This not only protects against any government spying, but has the added benefit of preventing online marketers from learning much about you. Of course it also means you should be able to bypass any local site DNS blocks as well. 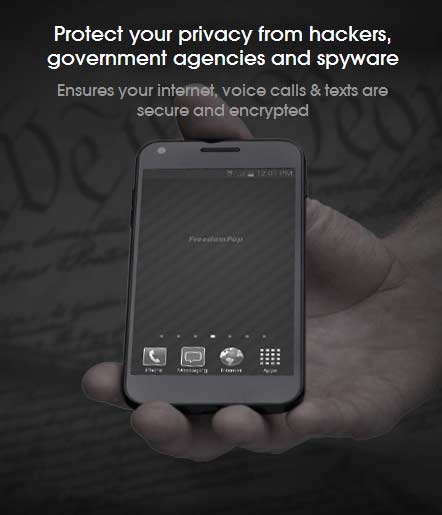 There’s also some more traditional protective measures in place though, such as anti-malware software, tools to find it again if you lose it and the ability to lock it down if you misplace it, encrypting your contacts, call and message history, as well as blocking phishing websites and other sites that might try and steal data through auto-complete or other methods.

To top it all off, if you want to buy one anonymously, you can order it with bitcoin, so there isn’t even a trace that you’ve bought one. The only downside at the moment is that it only seems to be available in the US.

KitGuru Says: Granted a phone like this is just as likely to be used for criminal means as it is protecting the rights of individual citizens, but that’s the toss up with these sorts of situations. You can’t have freedom, privacy and added protection from criminal activity in the same breath. Freedom comes with a price, but it’s one we should be willing to pay.