We ran some synthetic gaming tests with 3D Mark before we put the GTX 1650 Ti 4GB Max-Q to the test in real world scenarios. 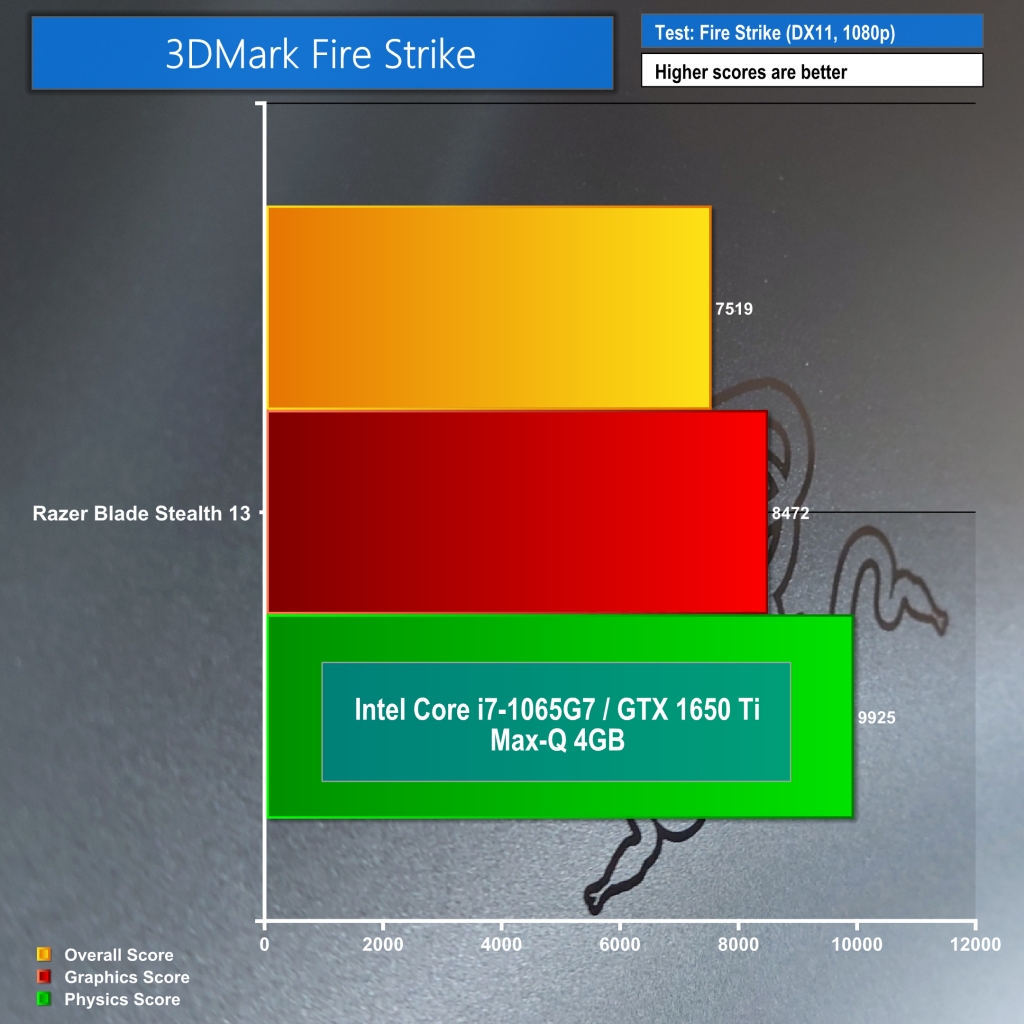 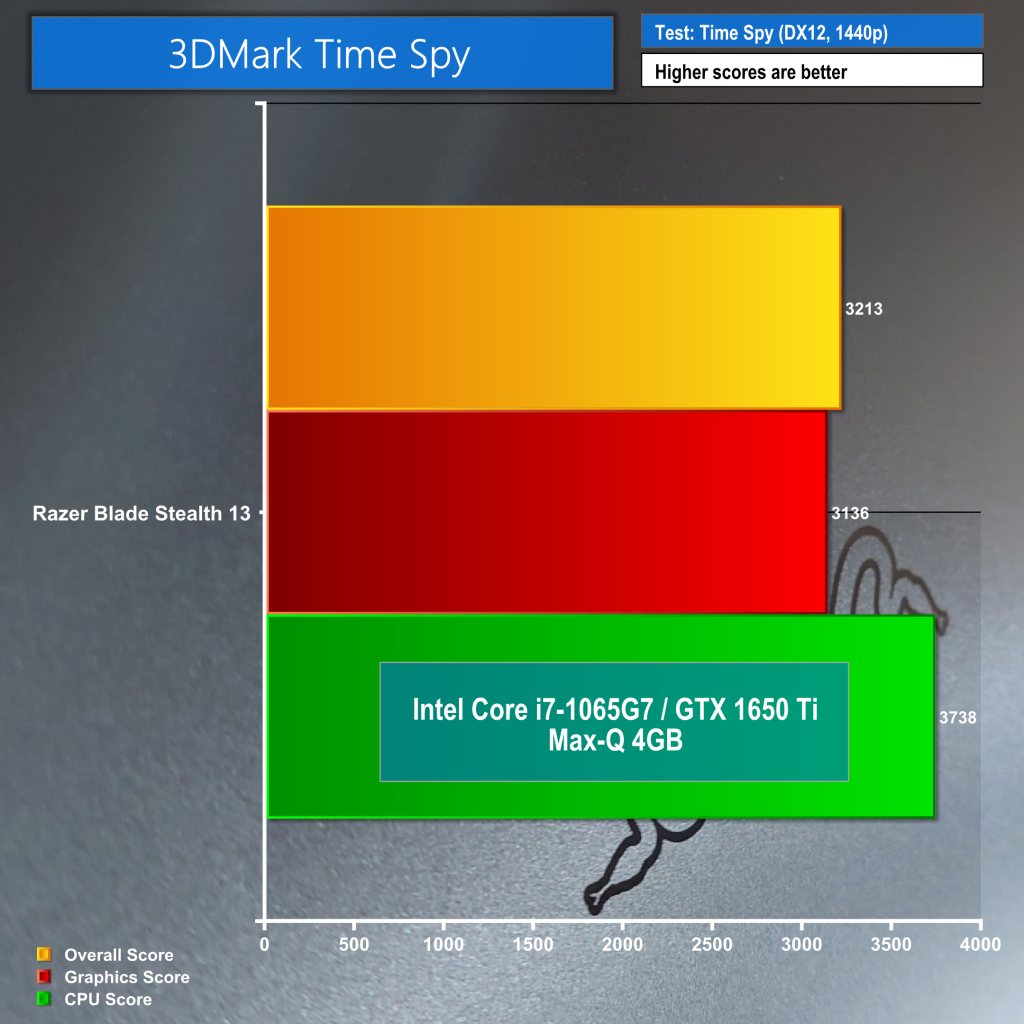 If we compared these results to other laptops the Razer Blade Stealth 13 would fall short, however; since this is an ultrabook these scores are actually very impressive. Let’s see how to copes with real world tests by checking out our gaming and FPS tests.

Let’s check out some gaming benchmarks! I tried to test various games, rather than targeting ones I knew would run great as I wanted to see if it was possible to play demanding games if you really wanted to. I ran Shadow of the Tomb Raider for that very reason, on a high preset at 1080p with DirectX 12 just to see if it could handle it, we got minimum FPS of 34 and an average of 45. I was generally impressed by this score, yes we have a 120Hz screen so you want that high FPS but if you spent some time making a custom graphics pre-set you could get the game running super smooth at a solid FPS, on a tiny, super portable ultrabook, that’s impressive. 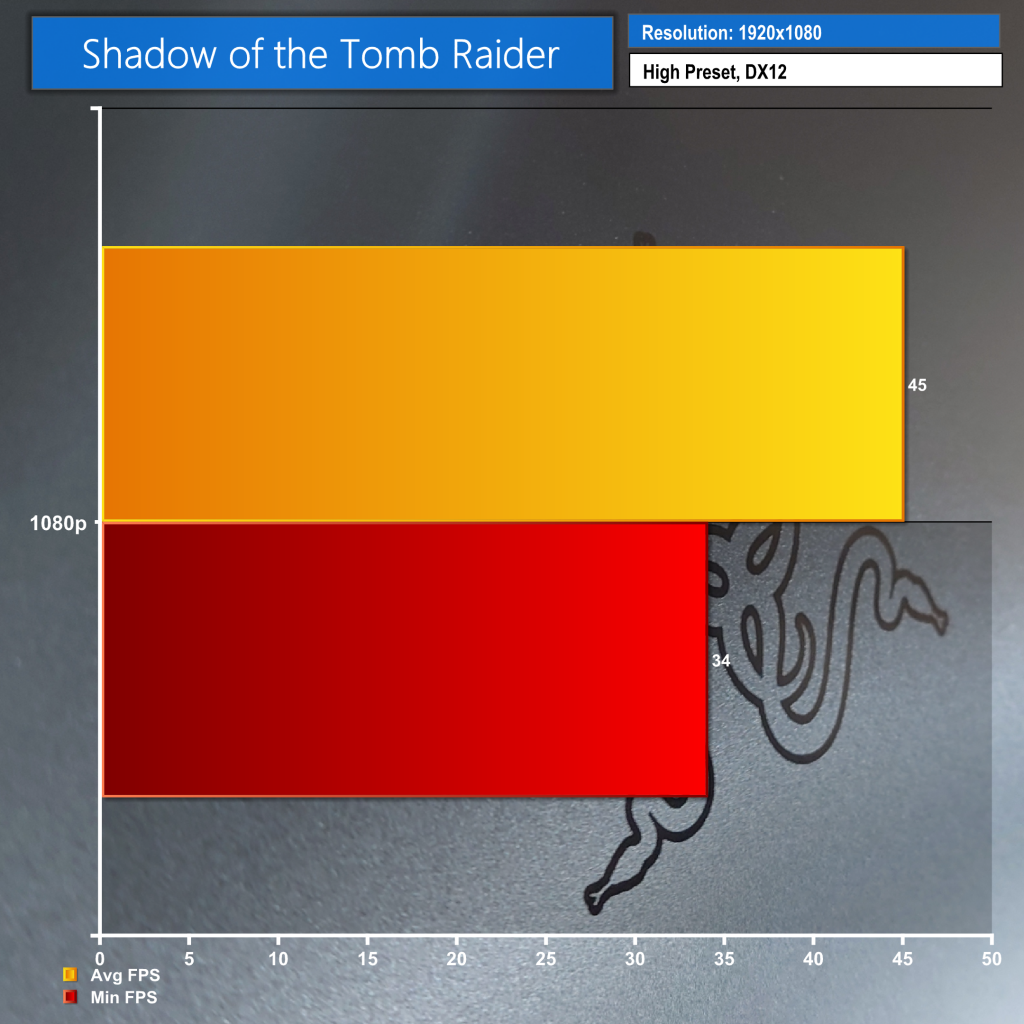 Next, we gave the opposite end a try, Counter Strike GO gave us minimum FPS of 67 and an average of 98 on the highest 1080p settings. Very playable and remember if you knocked a few settings down you could easily get over 100 FPS! 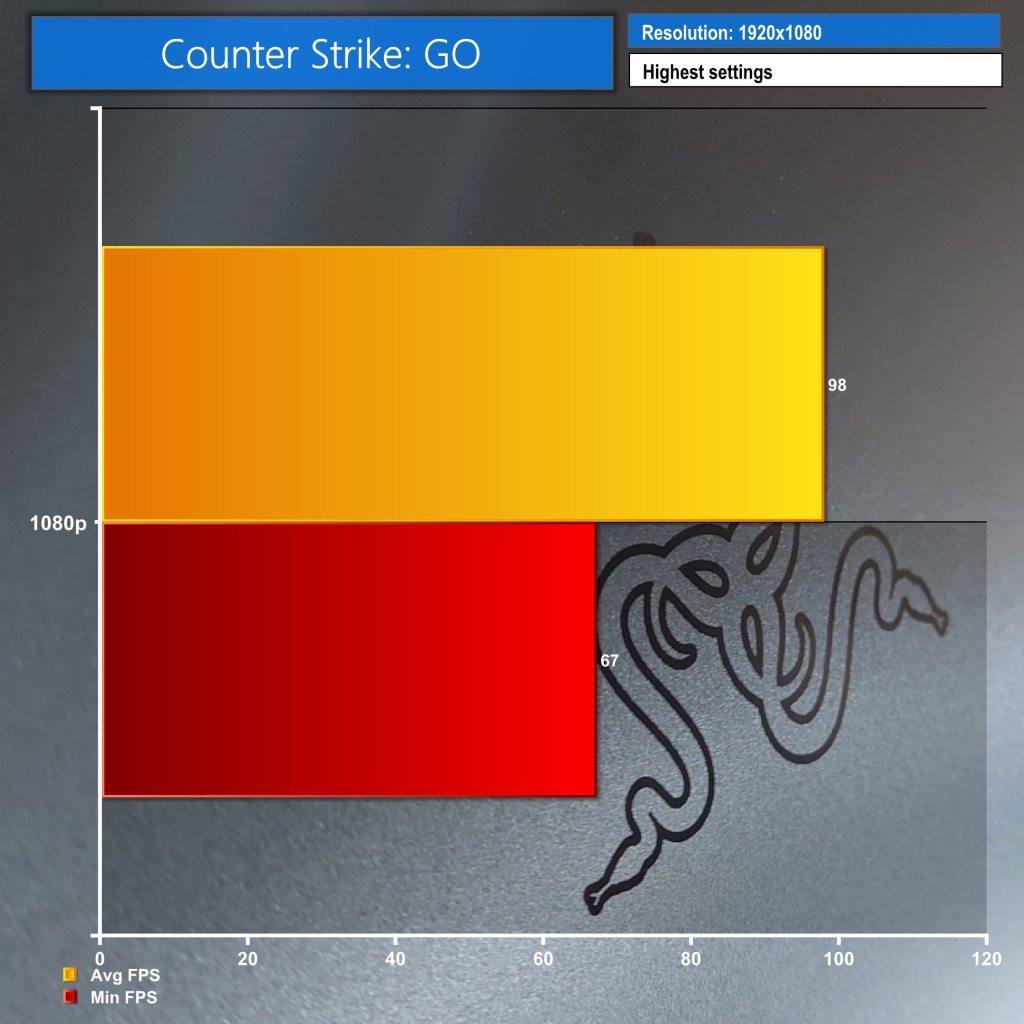 Resident Evil 2 remake on the recommended settings bumping texture quality up to 2GB gave us a minimum FPS of 50 and an average of 65, the game looked and played great and 65 FPS offered a smooth experience. 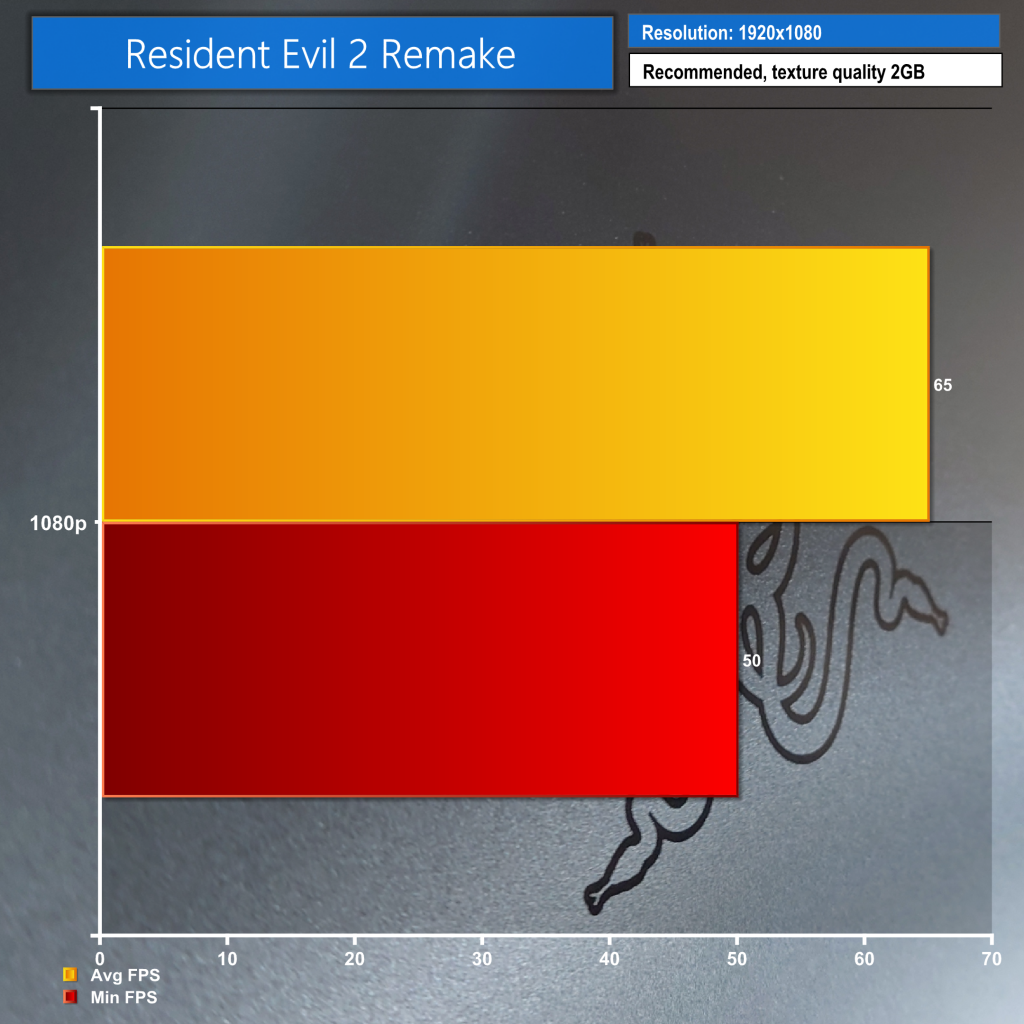 Finally, we tested everyone’s favourite, Call of Duty Warzone, again I pushed it up to high settings just to see and we got a min of 30 and average or 41. It’s fairly low but I’m seeing potential here! Drop a few settings and you could definitely get 60+ FPS here. Even at 41 I found it playable with only a few noticeable dips. 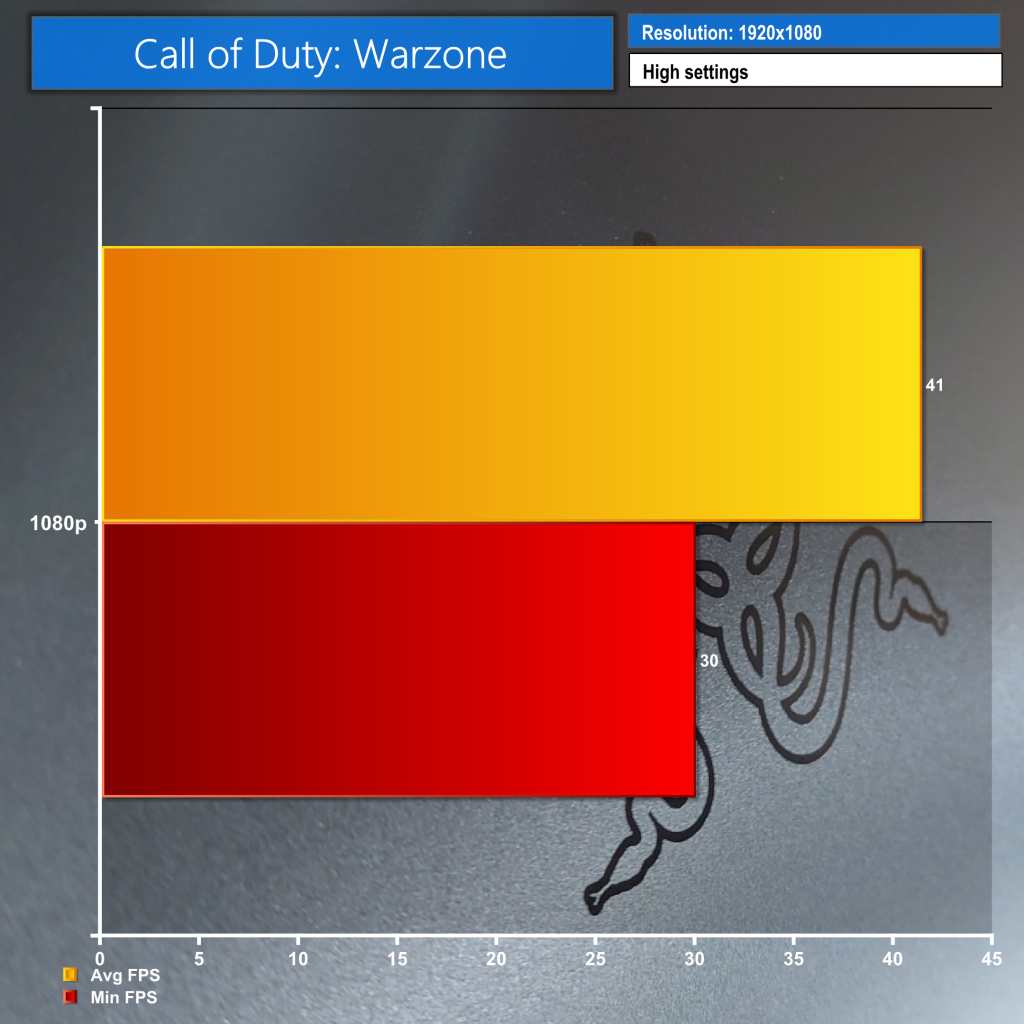 Once again we were very impressed at how the Razer Blade Stealth 13 held up in these real world situations.