Samsung Electronics has introduced a new NAND flash device that could enable low-cost smartphones and tablets with up to 128GB of storage space. The new eMMC memory chip is based on triple-level cell (TLC) NAND flash technology and is cheaper to make than multi-level cell (MLC) solutions of similar capacity.

Samsung’s 3-bit-per-cell NAND-based flash memory solutions with up to 128GB capacity are eMMC 5.0 standard compliant and are compatible with contemporary mainstream application processors. The TLC NAND flash device for mobile applications features up to 260MB/s sequential read speed and can handle up to 6000 IOPS (input/output operations per second) and 5000 IOPS for read and write operations, respectively. While performance of the solution is below that of eMMC 5.1 counterparts based on the MLC NAND flash, it should be sufficient for mainstream devices. Samsung claims that its new 3-bit 128GB eMMC 5.0 memory device is the industry’s highest density eMMC 5.0 solution. 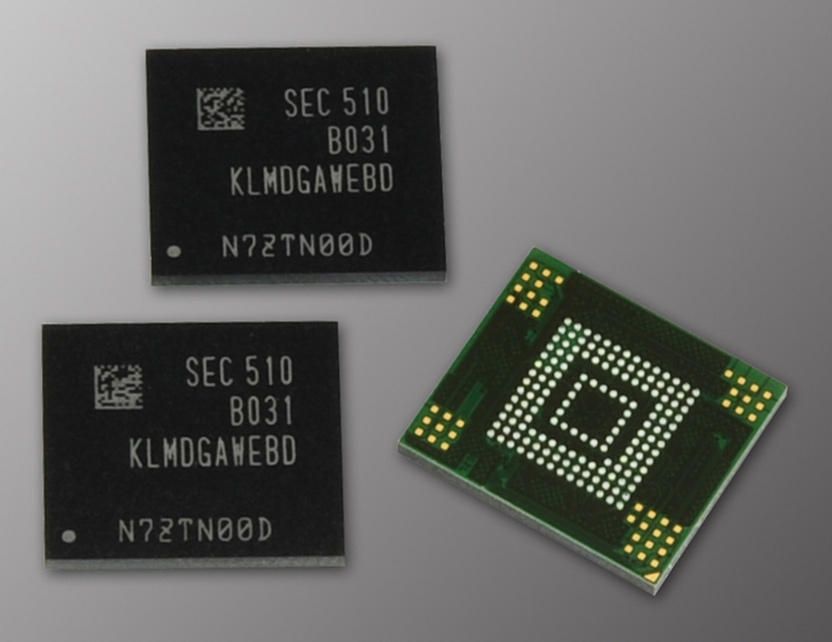 Traditionally, TLC NAND (also known as 3-bits-per-cell NAND) flash memory has been used for memory cards, audio players, USB drives and other consumer applications that do not rewrite data too often. For solid-state storage applications (like SSDs or smartphones) device makers preferred to use MLC NAND. The commodity MLC (also known as 2-bits per-cell NAND) memory can typically endure 3000 – 10000 erase/write cycles, whereas TLC can sustain just about 1000 erase/write cycles. In a bid to make a reliable TLC-based solid-state storage device, a special firmware design that balances performance, reliability and product life is needed.

“With the introduction of our value-focused, 3-bit NAND-based eMMC 5.0 line-up, we expect to take the lead in the expansion of high-density mobile storage,” said Jung-Bae Lee, senior vice president of memory product planning and application engineering team at Samsung Electronics. “We are continuing to enhance our next-generation embedded mobile memory offerings with improved performance and higher densities to meet increasing customer demand across the mobile industry.”

Samsung will begin shipments of new memory devices in the coming months.

KitGuru Says: Samsung uses TLC NAND for a variety of applications, including solid-state drives for client and server PCs. Therefore, it is not surprising that the company now offers TLC-based solutions for low-cost smartphones and tablets.