Although notebooks have seen a decline in sales over the past two years, the mobile gaming market has continued to grow thanks to AMD’s first-generation Ryzen Mobile processors at the end of 2017. The company hopes to maintain this trend, while bolstering almost every notebook market possible with its second-generation of mobile processors.

AMD’s Mobile roadmap for 2019 is the most comprehensive in the company’s history, ensuring that it covers almost every area of the notebook market. Alongside its newfound push into Chromebooks, AMD’s brand new Athlon 300U covers entry-level devices, while its 4-core Ryzen 3000U Series covers all areas of Windows PCs and Ryzen 3000H Series amps up the power for gaming notebooks.

Observing the average age of consumer laptops to be 4.8 years old, AMD compared its Ryzen 3 3300U to laptops from 2015. Those planning to upgrade from these aging devices could see a performance increase of up to 61% when engaging in everyday tasks, such as Microsoft Office, Photoshop or web browsing, according to senior technical marketing manager for AMD’s client business unit, Robert Hallock.

It’s not just about numbers with second-generation Ryzen, but features too. Older devices often can’t spend too long without needing charge, while AMD’s latest mobile offerings grant up to 12 hours of battery life. This can vary depending on the task, such as watching videos in 4K HDR, provided that internet speeds can keep up, and the limited gaming capabilities that the Ryzen 3000U Series possesses.

Going head-to-head with Intel’s latest 8th generation mobile line-up, AMD swears that it is set to offer the fastest notebooks on the market. Comparing the Ryzen 5 3500U with the Intel Core i5-8250U, AMD boasts that its second gen Ryzen, based on 12nm Zen+ Ryzen architecture rather than the 7nm process, can perform up to 27% faster when editing photos and improve general browsing speeds by up to 14%. Stepping things up, the Ryzen 7 3700U pitted against the flagship Intel Core i7-8565U also provides better results, achieving an average of 12 frames greater across Rocket League, Dota 2 and Fortnite. Granted, these settings are compared using a low graphical preset at 720p resolution; however none of these processors are explicitly designed for gaming.

Instead, AMD is tackling the gaming notebook market with its Ryzen 3000H Series leading the charge. The ASUS FX303DY TUF Gaming Notebook is the first to offer the choice between the Ryzen 5 3550H and the Ryzen 7 3750H, both at 35W. Hallock explains that the much higher power envelope compared to the 15W Ryzen 7 3700U allows both mobile gaming processors to be paired with a discreet graphics card, such as the 4GB Radeon 560X seen in the newly unveiled ASUS notebook. 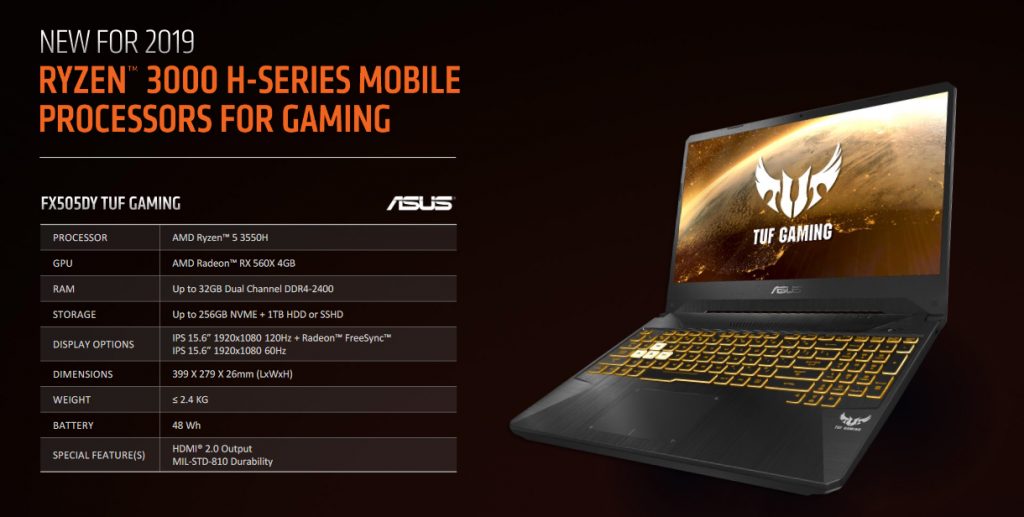 Accompanying the comprehensive hardware refresh is the promise of regular driver updates for “past, present and future” Ryzen Mobile users, starting in Q1 2019. This ensures that all discreet Radeon graphics driver updates will cater to first-gen 2000 Series owners, as well as the latest Ryzen Mobile 3000U, 3000H and Athlon-based devices.

AMD will debut these processors during CES next week, alongside its brand new A4 and A6-powered Chromebooks.

KitGuru Says: AMD claims that it continues to offer the “world’s fastest processor for ultrathin notebooks,” however these claims still need to be tested by third-parties. Still, these lofty promises are sure to shake-up competition in the notebook market throughout 2019. What do you think of second-gen Ryzen Mobile?