Gigabyte has readied a new range of laptops for both gamers and content creators. Gigabyte claims it will be “the first in the industry” to launch laptops carrying the 10th Gen Intel Core i9 and i7 H-series CPUs and Nvidia GeForce RTX 20-series GPUs.

Gigabyte has partnered with G2 Esports team to launch its new Aorus gaming notebooks to meet “the requirements of pro gamers”, including features such as mechanical keyboards, high refresh rate displays with up to 240Hz and an improved cooling system. 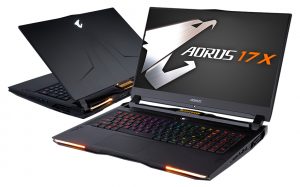 Starting with the Aorus 17X, this 17.3-inch laptop comes with a mechanical keyboard, featuring Omron switches and Aorus RGB Fusion 2.0 lighting system, for each key. There will be multiple graphics card options available, from an Nvidia GeForce GTX 1660 Ti to an Nvidia GeForce RTX 2080 SUPER, and CPU options, such as the Intel Core i7-10750H, Intel Core i7-10875H, and Intel Core i9-10980HK. On the RAM options, there will be 2x slots for DDR4 2666MHz/ DDR4 2933MHz memory, with a maximum of 64GB.

The display will be up to 240Hz FullHD with most 17X variants, while the 1660Ti variant will have a FullHD 144Hz IPS display. The cooling system is composed of 5 heat pipes, 4 vents, a vapour chamber and 2x 12V fans with 51 blades each. Storage compatibility includes 1x 2.5-inch drive through SATA ports, and 2x M.2 SSD slots, 1x NVMe PCIe and SATA and 1x NVMe PCIe. All variants come with a dedicated ESS Sabre HiFi Audio DAC, Killer Ethernet E2600, and Killer Wi-Fi 6 AX1650. 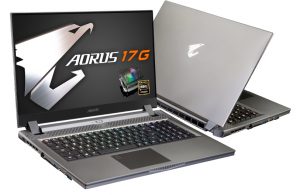 The Aorus G series has a 15-inch and a 17-inch model, both with mechanical keyboards with Omron Switches and Aorus RGB Fusion 2.0 lighting system. GPU options start with the GeForce GTX 1660 Ti, and goes to as high as a GeForce RTX 2080 Super with Max-Q design, while the processors available are the same as the 17X model. The maximum RAM is 64GB across 2x slots for DDR4 2666MHz/ DDR4 2933MHz memory.

The display of the 15G is an IPS with 144Hz of refresh rate and 1080p resolution, but there's also an IGZO option, with the same refresh rate and resolution. The 17-inch model's display can either be a 240Hz FHD anti-glare panel or a 144Hz FHD anti-glare display. Both models use the same cooling system, composed of 5 heat pipes, 4 vents, and 2x 12V fans with 51 blades each. For storage, both models and variants have 2x M.2 SSD slots that support 1x NVMe PCIe and SATA and 1x NVMe PCIe. All models and variants also come with Killer Ethernet E2600 and Killer Wi-Fi 6 AX1650. 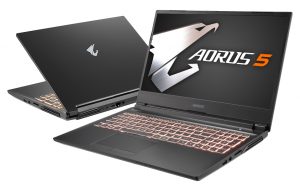 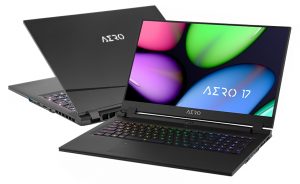 The Aero line also has both 15-inch and 17-inch models, all with a Gigabyte Fusion RGB Per-Key backlit keyboard. The CPU options include an Intel Core i9-10980HK, Core i7-10875H or a Core i7-10750H, while the GPU options also range from an Nvidia GeForce GTX 1660 Ti to an Nvidia GeForce RTX 2080 SUPER with Max-Q design. RAM options are also similar to the previously mentioned laptops with up 64GB of RAM over 2x slots for DDR4 2666MHz/ DDR4 2933MHz memory.

The smaller 15-inch model can be equipped with either an FHD 144Hz IPS display or a Samsung UHD AMOLED display, while the 17-inch model has a FHD 144Hz IPS display option and a UHD HDR400 Adobe RGB 100% IPS display option. All display options come individually factory calibrated and with and average Delta-E < 1, certified by X-Rite Pantone. The cooling system includes 2x fans with 71 blades each, 5 heat pipes, and 11 vents. For storage, the options are similar to the G series with 2x M.2 SSD slots supporting 1x NVMe PCIe and SATA and 1x NVMe PCIe. All models and variants come with Killer™ Ethernet E2600 and Killer™ Wi-Fi 6 AX1650.

KitGuru says: Are you in the market for a new laptop? Out of these, which one fits your needs the most?