AMD has launched the new Ryzen 5000 Mobile series of Zen 3 processors and we have had some time to play about with the Ryzen 9 5980HS in the slim-and-light ASUS ROG Flow X13 laptop. The eight-core, sixteen-thread Ryzen 9 5980HS is a performance monster in its 35W TDP mode, but there are some quirky clock speed and throttling behaviours with the Flow X13 laptop. Let’s have a closer look.

Graphics comes from both the Vega cores in the AMD APU and from a discrete Nvidia GTX 1650 Max-Q chip in 35W power form. But we are more interested in the CPU element of performance than that of the ageing, mid-range GTX graphics chip. 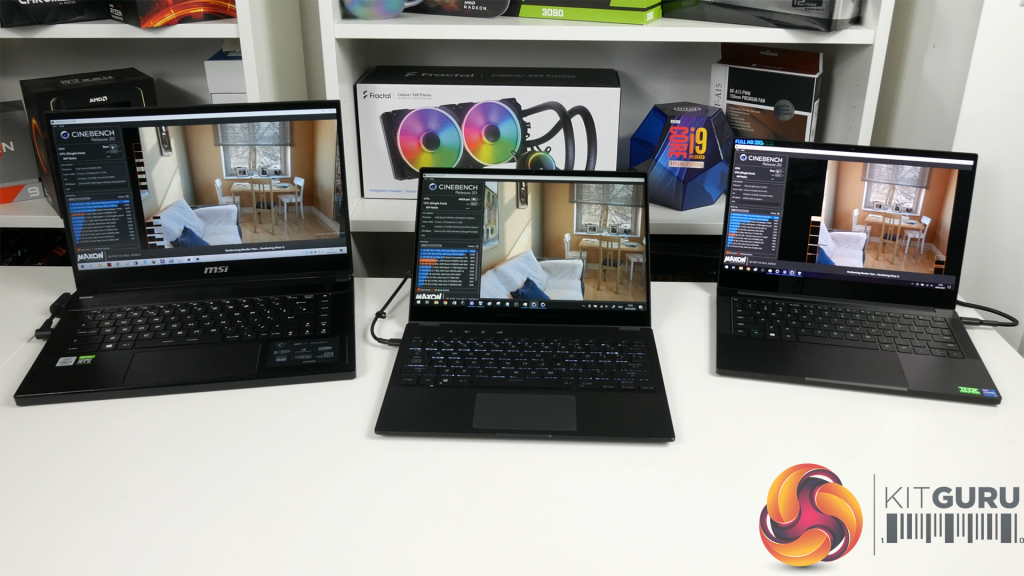 Versus the logical competitor that is an Intel Tiger Lake Core i7-1165G7 in 28W form, the Ryzen 9 5980HS is in a completely different performance league for multi-threaded rendering. In fact, Cinebench scoring puts AMD’s new 35W TDP eight-core chip well ahead of Intel’s powerful Core i9-10980HK in its 45W operating mode.

There are quirks to the Ryzen 9 5980HS operation inside the ASUS ROG Flow X13 laptop, though. Most notable is that this 35W chip doesn’t really operate at 35W package power when conducting those tests using ASUS’ “Turbo” out-of-the-box power mode. Hence our comparison versus the less power-restricted Core i9-10980HK configuration (where AMD’s Ryzen 9 still wins comfortably in Cinebench). 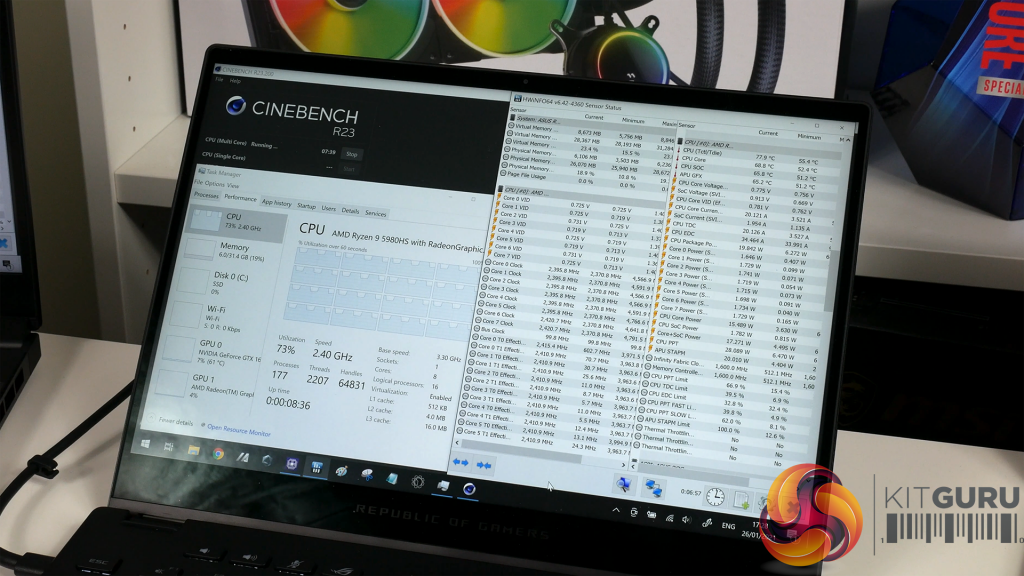 More interesting, however, is the throttling behaviour observed when running sustained CPU load tasks on the ASUS ROG Flow X13 laptop. This behaviour is not all that obvious initially when the 5980HS CPU ramps up to around 54W package power usage and all-core operating frequencies close to 4.0GHz.

However, consistent cyclical behaviour with relation to the clock speed sees all-core frequency dropping to around 2.4GHz for brief, but noticeable, time periods. That’s a 20% clock throttle below the rated base clock of 3.0GHz.

And it’s not just heavy multi-threaded rendering tasks where this clock speed reduction behaviour is observed; we also saw instances where clock speed would reduce by around 1GHz when in the middle of a gaming session on GTA V. 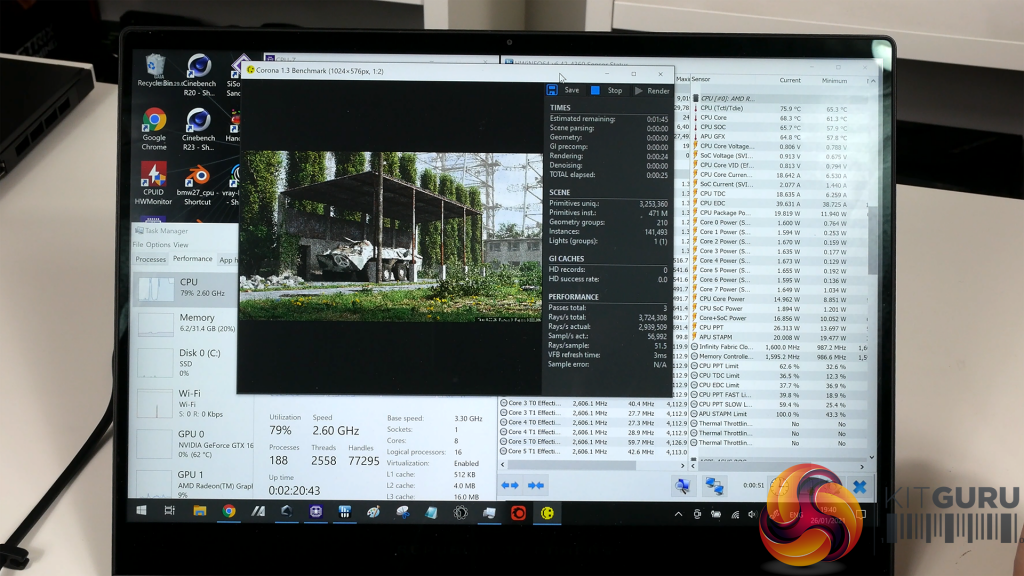 This clock speed behaviour looks to be related to the laptop’s adoption of one of AMD’s advanced system monitoring techniques. Skin Temperature Aware Power Management (STAPM) data that can be read via HWiNFO highlights a power target that coincides with significant CPU package power moderation.

We will see the CPU operating at high clock speeds and 54W of package power, before the STAPM metric looks to hit a threshold that causes a sizable reduction in allowable CPU package power and therefore operating frequency.

Wondering if this was simply a bug relating to our monitoring software, we kept an eye on the physical wall power draw measurement and also noticed a reduction in system power usage that coincided with the clock throttles.

This is an interesting operation mode that looks to be used by design on the ASUS ROG Flow X13. The laptop is a performance powerhouse, as highlighted by our quick side-by-side Cinebench testing. However, the variation in CPU clock speeds based on allowable power budgets that are well below the CPU’s rated 35W TDP could have some interesting performance consequences. Such as adjusting frame rates in gaming scenarios, or better averaged performance for long-duration rendering tasks.

The power behaviour on AMD’s new Zen 3 mobile processors has us intrigued for applications such as the 15.8mm-thick ASUS ROG Flow X13. Clearly, AMD has opened up a new tier of performance to sleek, lightweight powerhouse notebooks. However, we have observed some interesting operating states based on the OEM implementation of our Ryzen 9 5980HS sample.

KitGuru says: It will be interesting to see how performance for the Ryzen 9 5980HS in the ASUS ROG Flow X13 stands up in our full suite of benchmark tests. Check back soon for the full review.