Choosing the correct case for your phone is a tricky proposition. Do you go for full protection, and give up the aesthetics of your expensive new phone, buy one with minimal protection, or just go nude? A German engineer is looking to make that decision easier, with his active-damping smartphone case.

The ‘active dampening case’ works by using eight curled metal strips, two on each corner, all attached to ‘feet’. These can deploy when the case detects that the phone is in free fall, the strips then spring out, deploying the feet, which then absorb the impact and protect your phone. The sensors used are in the case itself, and after the impact absorption mechanism has been deployed, the feet will fold back into the case. 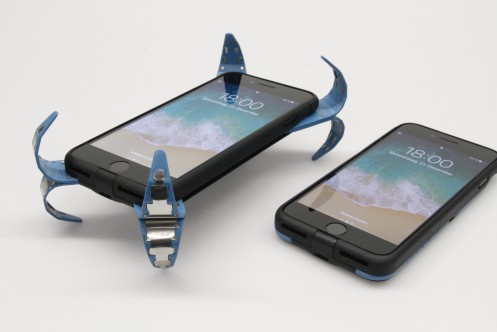 As TechCrunch reports, this case is still in the prototype phase and won’t be ready to hit mass production for a while. However, this case should appeal to two crowds, those who need a case to fully protect their smartphone, and those that don’t want their case to detract too much from their device’s design.

One of the concerns right now is stopping accidental deployment of the impact absorbing feet when a phone is in a pocket or bag. Currently, we don’t know how this issue will be addressed, but we should hear more as development continues. This case is being developed by Philip Frenzel of the Aalen University in Germany. His idea for this case won an award from the German Society of Mechatronics, and a patent is now pending, so we should see this turn into a fully-fledged product in the future.

KitGuru Says: It is an interesting idea that if implemented well in its final iteration, could become a new standard. What do you use this case with your smartphone?