The first images and details of Samsung’s upcoming tablet, the Galaxy Tab 2, have leaked online. Currently, the device is not expected to launch until June exactly one year after the launch of the original Samsung Galaxy Tab S.

The first image shows a render of the device, it comes from OnLeaks, which has a pretty good track record with mobile device leaks. The Galaxy Tab S2 will feature a 9.7 inch screen, although there is apparently a second 8-inch Samsung tablet in the works as well. 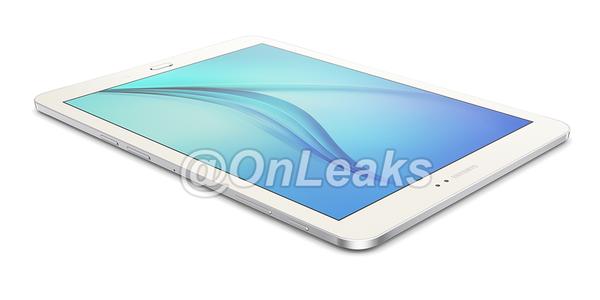 Samsung is aiming to take on the iPad Air, by making its flagship tablet even thinner than the iPad Air 2. As far as specifications go, early rumours suggest that the tablet will be packing a 64-bit Exynos SoC, 3GB of RAM and 32GB of internal storage.

Since this is a new Android device, it will be coming with Android Lollipop installed. While Samsung’s previous tablet efforts have never garnered much fanfare, last year’s Galaxy Tab S was well received by reviewers. It seems that Samsung is stepping up its tablet ambitions and truly trying to take on the iPad, which is beginning to see a decline in sales.

KitGuru Says: Do any of you own a Samsung Android tablet? Would you buy another one?