Hot on the heels of yesterday's leaked images of the massive 18.4 inch Galaxy View tablet, Samsung has officially announced it today, proving most of the rumours correct after all. The oversized tablet will feature a 1080p display and it seems to be targeted towards those looking to consume a lot of media but would rather have an Android tablet, than a laptop.

Like most tablets, the Galaxy View does have a camera on it for some reason, though it only has a single front facing 2.1 megapixel sensor. There is a kickstand to help keep the tablet upright while in use and the whole device measures in at 11.9mm thick. 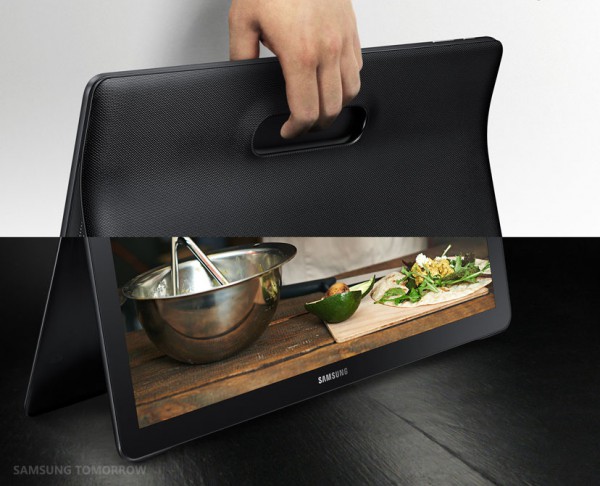 For an OS, we have Android 5.1 Lollipop, rather than Google's latest flavour, Marshmallow. Samsung also packed in one of its own eight core Exynos processors running at 1.6GHz and 2GB of RAM.

Given how huge this tablet is, there should be plenty of room for a beefy battery. The Galaxy Vieew sports a 5700 mAh battery, which Samsung claims will last eight hours of continuous video playback. It's not the most high end thing in the world as far as hardware goes, but it certainly stands out. Unfortunately, we don't have a price just yet so we don't know how this stacks up to Apple's own oversized tablet, the iPad Pro.

KitGuru Says: The Galaxy View actually looks pretty decent, though the hardware isn't really anything ground breaking. I imagine the price will be significantly lower than the iPad Pro too. What do you guys think of the Galaxy View? Do you think there is a market for such a huge tablet? At this size, I think I'd rather just get a laptop myself.