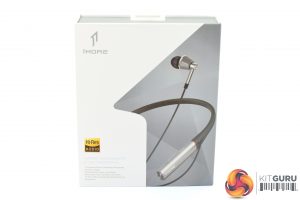 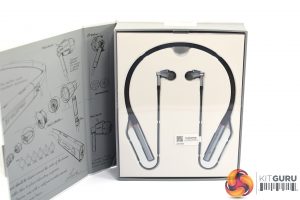 The 1MORE Triple Driver BT ships in a white and grey box, with a partial image of the earphones visible on the front.

The lid of the box lifts off to reveal the earphones and neckband safely stored in a protective container. 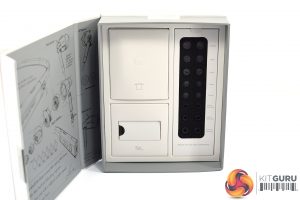 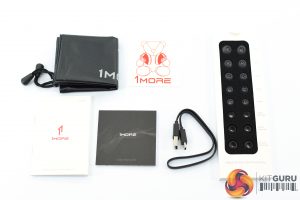 If we remove the part of the box with the earphones in, underneath that we find all the accessories neatly laid out in small compartments.

1MORE has been quite generous with the bundle, as we find two pieces of documentation alongside a USB-C cable (for charging), as well as a soft carry bag and a sticker. In terms of ear tips, we have the same bundle that came with the Quad Driver – meaning a total of 5 silicon pairs and 3 foam pairs, ranging in size from 10mm to 14.5mm. 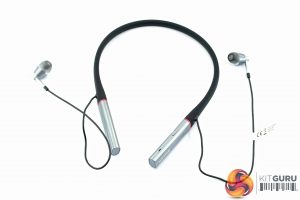 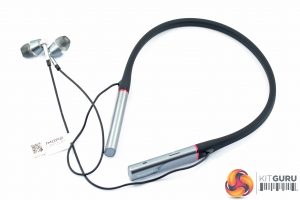 Coming now to the Triple Driver BT itself, obviously as mentioned this is a neckband style Bluetooth solution so it is not fully wireless, but I still find these much more convenient than a traditional wired earphone.

For those interested, the wire from the neckband to each earphone measures approximately 22cm. We will now take a closer look at each of the different aspects to the Triple Driver BT. 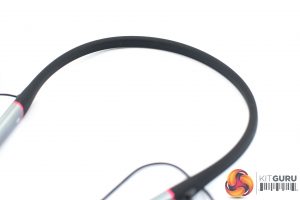 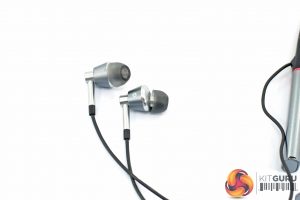 Starting with the black neckband, this is made of silicon and is very flexible – you could do a relatively good job at folding it up and stuffing it away if you wanted, though I perhaps wouldn’t recommend it! We’ll talk about comfort on the next page.

Then there’s the earphones themselves. These are metal plated – 1MORE uses an aluminium alloy for the driver housings – and also sport the same 45-degree angled shape as the Quad Driver for a natural fit into the ear canal. In terms of drivers, each sports one dynamic driver and two balanced armatures. 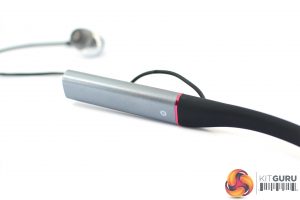 At the bottom of the neckband, we find two silver sections which are used for on-ear controls and battery storage. The outside of each section sports the 1MORE logo, and it is also worth noting all the on-ear controls are on the left-hand side – as we can see above, the right-hand side is left bare. 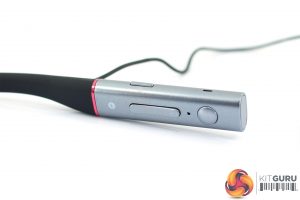 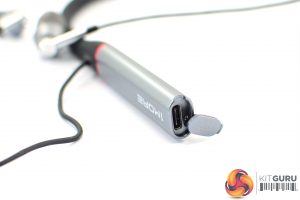 So, on that left-hand side we find a volume rocker and a play/pause button either side of a small microphone for conducting phone calls. On the top edge there is also a power button and an LED indicator.

The last thing to point out is the USB-C port used to charge the earphones. This is housed under a small flap at the end of the left-hand side of the neckband.