A little while ago we took at two Xbox 360 headsets from Plantronics and were very impressed with what they offered for the money. We did however comment that the Wireless X95 headset would be a much better product if it featured an integrated rechargeable battery, as buying replacement batteries could incur a significant cost for the owner.

Today we are going to look at one of Plantronics‘ wireless PC headsets, the Audio 995, which boasts an impressive feature set that includes an integrated rechargeable battery. We look forward to seeing if it reflects the high standard of the two Plantronics Xbox 360 headsets we looked at previously.

Unlike some other wireless headsets that we’ve looked at in the past, the Audio 995 doesn’t connect via Bluetooth. It connects via a small dongle which must be plugged into one of the USB ports on your computer. Due to this method of connectivity, the headset is only compatible with PC and can’t be used with most mobile devices or game consoles. 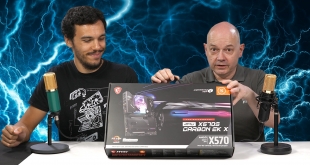 In this episode, Leo and Luke discuss new AMD X570S motherboards with an appearance by MSI's MPG X570S Carbon EK X. As usual, ramblings hit a variety of topics including liquid cooling, airflow, and Leo's own system that he uses daily...