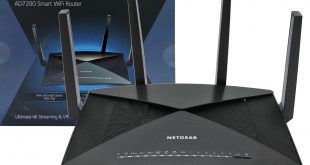 You can never have a fast enough network, especially where WiFi is concerned. NETGEAR's Nighthawk range already has a reputation for performance. With the X10 R9000 AD7200 Wireless Router, though, NETGEAR takes WiFi to the next level with our first look at 802.11ad.

However, before you get too excited, thinking that “d” comes after “c” so 802.11ad must be the 802.11ac replacement, it isn't. This is a very specialised kind of WiFi signal aimed at huge bandwidth, but only over short distances and without obstruction. It operates at 60GHz, so is much more susceptible to being blocked by walls than 5GHz 802.11ac or 2.4GHz 802.11n, and indeed is even blocked by the oxygen in the air, although not too badly. It also supports up to 7Gbits/sec throughput (the R9000 only offers 4.6Gbits/sec), which is more than five times as fast as 802.11ac.

Unfortunately, 802.11ad is not currently supported by very many client devices, and we had to work hard (as well as delaying this review) until we could get our hands on a notebook with 802.11ad so we could test the new standard.

But we have our greedy mits on a compatible laptop now, so will be able to give you the full details of whether 802.11ad is up to its billing. 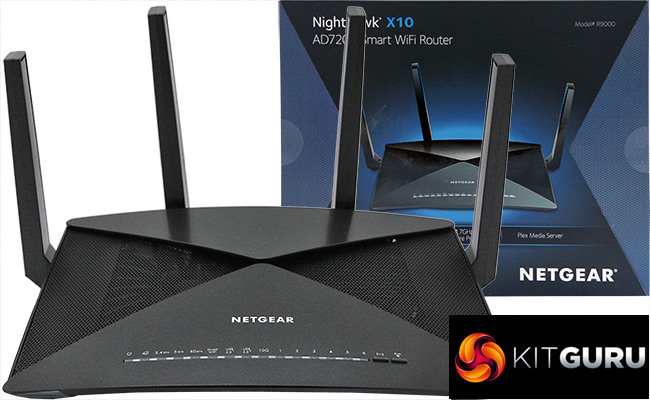 The R9000 is not just about its 802.11ad WiFi, however. NETGEAR has thrown the kitchen sink at this router in an attempt to make it the fastest and most feature-rich wireless kit money can buy, including a 1.7GHz quad-core processor, which is supplied so that the installable PLEX Media Server can transcode like a boss.

There's a very comprehensive array of ports included too, with seven Ethernet ports (one for broadband usage) and a SFP+ connector that can accept modules for 10Gbit Ethernet. Two USB 3.0 ports are also included for attaching external storage devices or printers. On paper, this is one wireless router to rule them all, with a price to match. So let's find out if it can bind all your networking needs together, and in particular whether 802.11ad lives up to its billing.