We pay careful attention to any artefacts, ghosting or motion blur, and enable any gaming specific features, such as adaptive-sync settings like G-Sync or FreeSync, using a compatible graphics card in our test PC.

In the case of the 328P6AUBREB, we had intended to perform all our tests via USB-C, since the system we use has this kind of connection. But although this worked with ASUS's ZenScreen MB16AC, it wasn't detecting the 328P6AUBREB as an attached display, just a USB hub.

However, we happened to have a MSI WT73VT 7RM notebook to hand, which also has USB-C, and that worked just fine. The video was transferred up to native resolution, the audio signal was coming out of the Philips screen's built-in speakers, and the USB keyboard and mouse connected to the hub were detected and functioned as expected. So you really can use one connection for all requirements with the 328P6AUBREB – assuming it works.

But as a result of the non-functioning USB-C display connection on our main test rig, we had to switch to DisplayPort for your quality tests. We performed these at the native 2,560 x 1,440 resolution in the default mode, after resetting the OSD. Our test system was equipped with an AMD Radeon Vega Frontier Edition graphics card. 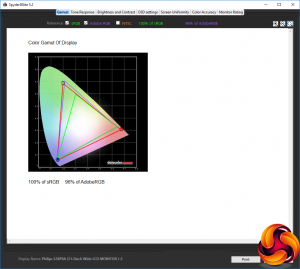 The gamut is excellent, with 100 per cent of sRGB and 96 per cent of AdobeRGB, with the latter very close to the quoted figures and one of the best results we've seen in this test. 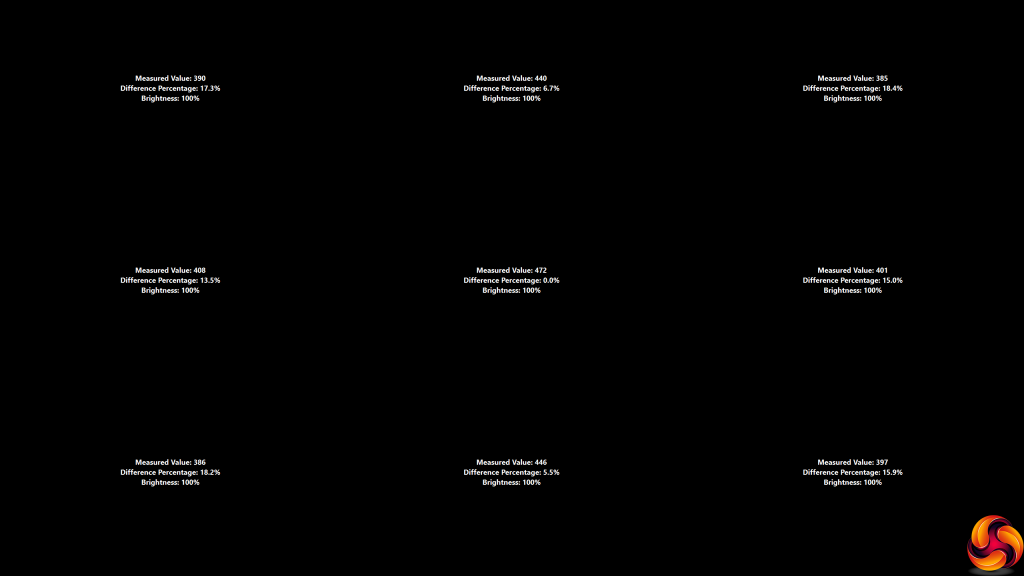 Unfortunately, unlike the gamut, brightness uniformity is not great, with at least 13.5 per cent divurgence on the sides and corners compared to the centre. 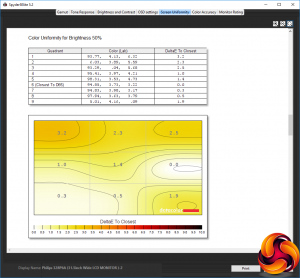 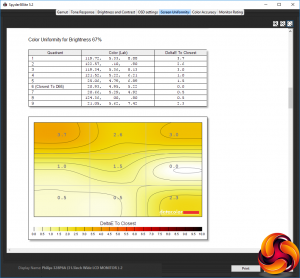 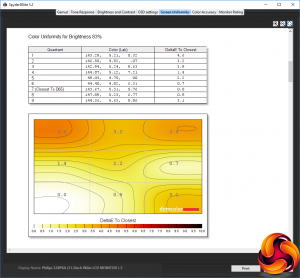 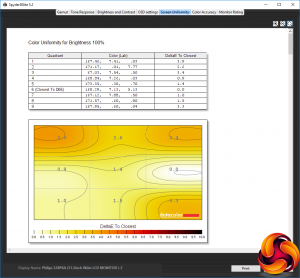 The poor brightness uniformity doesn't translate into poor colour uniformity, thankfully. In this respect, the 328P6AUBREB is near the top of the pile. 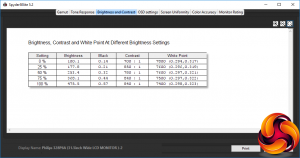 Measured brightness rises reasonably in proportion with the percentage setting, although the measured contrast is a little erratic, and white balance mildly erratic too. Although the top contrast of 850:1 is below the specifications rating, this is normal for testing with the Spyder, which always registers a lower figure than expected. Compared to other IPS panels, the 328P6AUBREB has decent contrast, and the top brightness of 475.5cd/m2 is high. 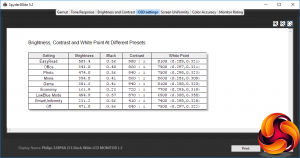 There are lots of OSD presets available, and their characteristics vary a lot.

The Low Blue Mode keeps things bright at 494.9cd/m2, with a high 870:1 contrast, but drops the white point to a much warmer 6500K, as you would expect for a setting that is supposed to reduce the tiring effects of blue light. SmartUniformity, interestingly, drops the brightness to 231.2cd/m2 and contrast to the lowest 410:1, but with a similar 7400K white point. 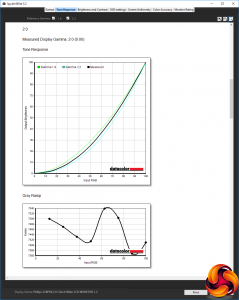 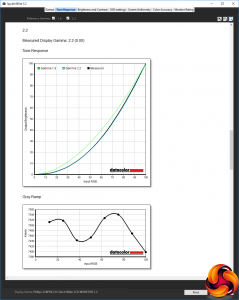 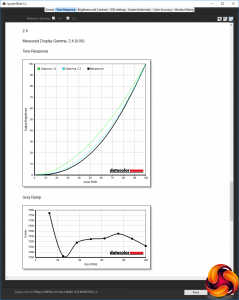 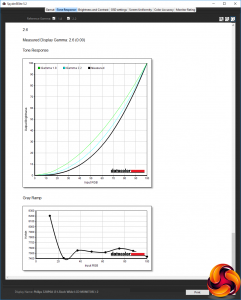 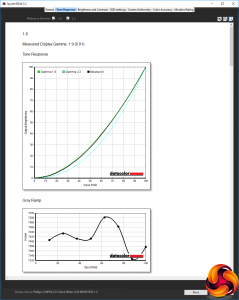 With the exception of the lowest 1.8 option, all the Gamma settings are spot on. This is impressive, and means you can be mostly sure that if you want a specific gamma level, the mode you select will provide what it says it will. 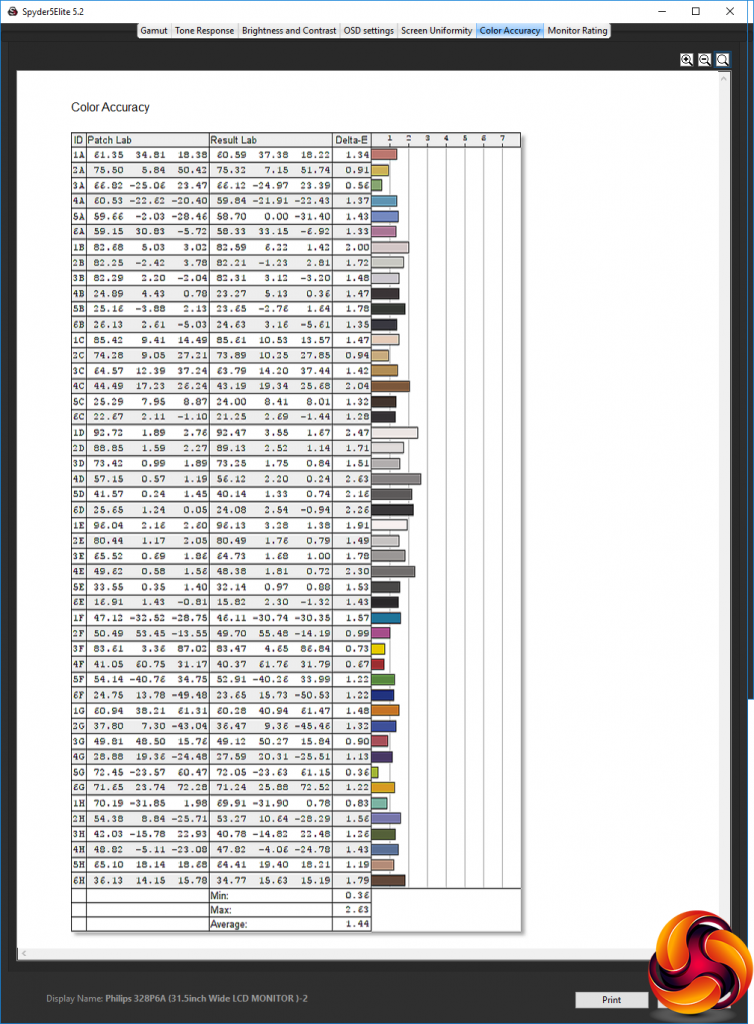 The 1.44 colour variance on average is also very commendable. It's not the absolute best we've seen out of the box, but is up there in the top echelons, giving yet more evidence that this is a quality IPS panel. But, as usual, we wanted to see if Spyder calibration could improve things still further. 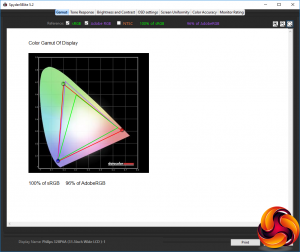 After calibration, the gamut is just as good as before, with 100 per cent sRGB and 96 per cent AdobeRGB. 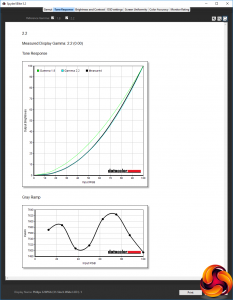 We only retested the gamma on the 2.2 setting, which stayed as a 2.2 reading. This is very gratifying considering that calibration involved reducing the brightness level to 38 per cent. 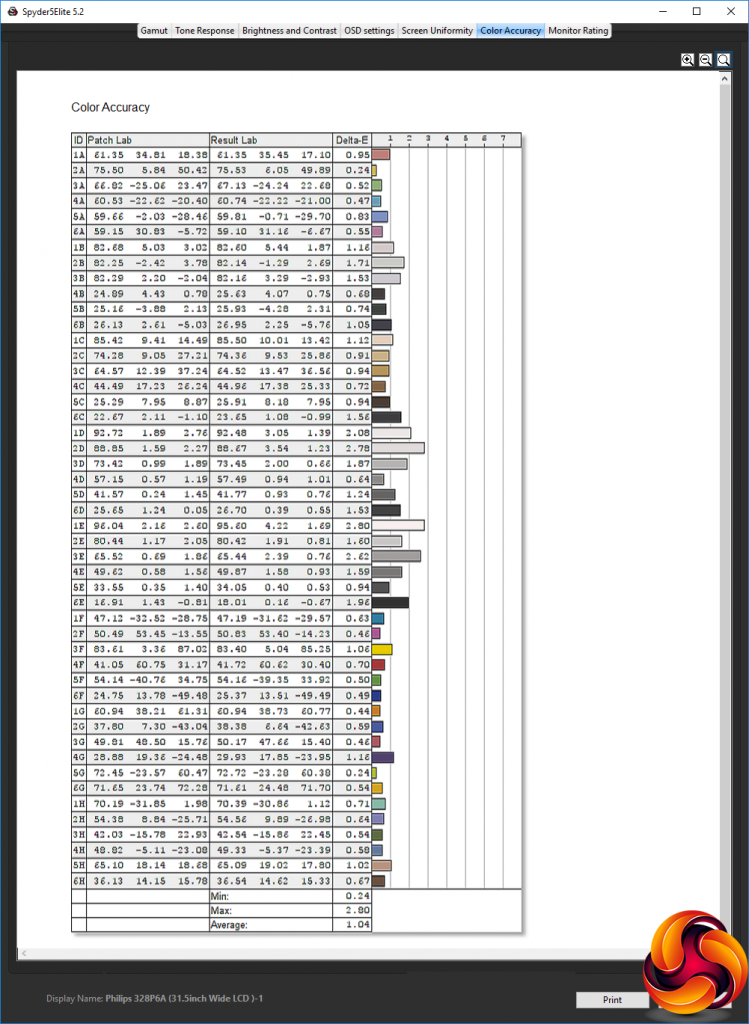 Colour accuracy is now even better. Again, we have seen a couple of monitors better the score of 1.04, but not many. This is one of the most faithful panels for colour we have tested, making it a great option for professional work.

Overall, apart from brightness uniformity, which is a bit of a worry, this is an excellent panel capable of great brightness and contrast, excellent colour fidelity, and with lots or presets that provide a wide variety of options for different usage scenarios.

We also tried some everyday activities and gaming on the screen. Movies looked particularly good, with the brightness levels making videos very immersive. Running the UFO Motion Test, ghosting wasn't particularly bad, considering the pixel response. However, this still wasn't a particularly great gaming screen, even with the overdrive options enabled. We've been spoiled by screens capable of 100Hz or greater now. Nevertheless, for the intended general-purpose, professional and business use, performance is great.