One of the big trends for gaming peripheral makers in recent years has been to recruit a famous Esports team and have them endorse your gear. Often that same team will be ‘involved' in some capacity during the development, offering pointers on features or aesthetics, but a lot of end-user sale points aren't really what the pros want. Which is why Fnatic has now split from Steelseries and launched its own line of gaming gear on Indiegogo.

The new range is known as Fnatic Gear and it comprises a full suite of hardware: mouse, mat and keyboard, all with a streamlined, understated design. The idea, we're told, was to create a line of peripherals that offered everything a pro-gamer needs and nothing more, which helps keep the peripheral free from clutter and distraction, as well as cheaper. 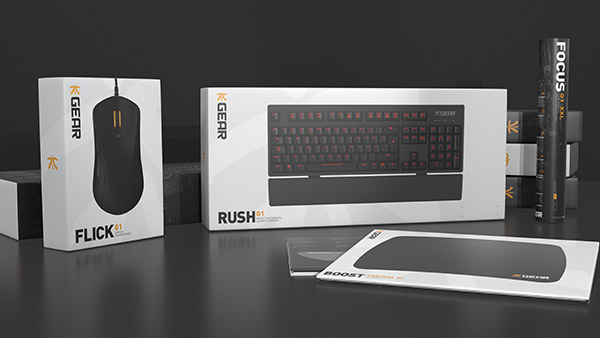 With that in mind, the keyboard, known as the RUSH, has a choice of Cherry MX mechanical switches (blue, brown, red), basic red LED backlighting, a pair of USB passthrough ports, some media function keys and a removable wrist rest. It also has full N-key rollover and on board memory for storing key profiles.

However it has no RGB lighting, no damepened switches, no custom keycaps or dedicated macro switches. It's quite a barebones design.

The mouse, known as the Flick, uses the popular Pixart 3310 optical sensor for high precision and zero acceleration. It has an ergonomic design but looks like it could easily be used ambidextrously and has on board memory for storing button profiles. Lighting is kept to a minimum and there is a single DPI select switch behind the scroll wheel.

Finally we have the Focus and Boost mouse mats, which offer cloth and hard surfaces respectively. Each has a fine texture to give a better tactile feel and a non-slip grip on the underside. They are available in a number of sizes, but are always super-thin at just 4mm thick.

The prices, while reasonable aren't exactly out of this world though. $50 for a gaming mouse lacking many common features or $120 for a keyboard of this type isn't that uncommon; and they become less attractive when shipping and import taxes are considered. Still this is a refined set of peripherals and these are indeed more likely to offer what the pro-gamers want, more so than branded products from big manufacturers.

KitGuru Says: I'd agree that the RGB backlighting isn't always necessary, but the keyboard still has the FN and media keys on opposite sides of the board. Maybe it's my small hands, but that makes no sense to me.

Previous Here are the system requirements for Just Cause 3
Next Do you want your digital assistant to be sassy?