Corsair has announced a new multi-year partnership deal with one of the leading esports teams in France, Team Vitality. The pair will come together in esports competitions across a wide variety of competitive games with Corsair providing the team with peripherals to help them win.

The new partnership deal will see Corsair equip Team Vitality with premium products including peripherals such as the K70 RGB MK.2 Mechanical Gaming Keyboard and Nightsword RGB Tunable Gaming Mouse, which the team will use in high-level esports competitions in 2020 and beyond.

“We couldn’t be more excited to partner with the biggest name in French esports,” said Lauren Premo, Director of Gaming Marketing at CORSAIR. “Team Vitality has consistently demonstrated its championship pedigree with major victories in the world’s most spectated games, such as CS:GO, and we’re ready to cheer them on as they win even more using CORSAIR gear.”

Since it was founded in 2013, team Vitality has gone on to compete in major esports tournaments with great levels of success in games such as CS:GO. Team Vitality currently employs more than 50 team members with some of the best players in the world in its ranks. 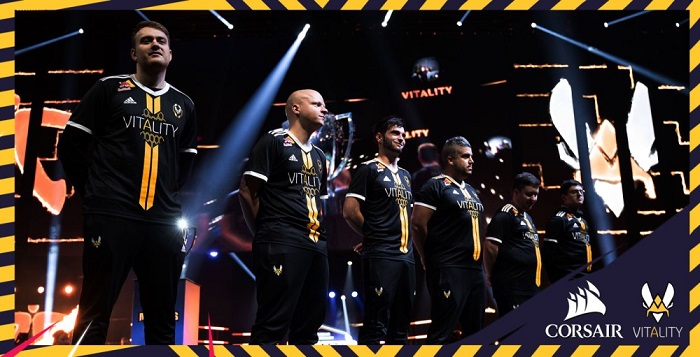 The teams HQ is located at V-Hive in Paris with an additional location at the Stade de France, both these locations will be fitted out with Corsair peripherals. In addition, Corsair is set to collaborate with Team Vitality to design and build new products for high level competitive professional gaming.

“This collaboration with the powerhouse CORSAIR marks another milestone for Team Vitality, said Nicolas Maurer, CEO of Team Vitality. “Being able to sign a multi-year agreement with such an esteemed brand proves once again the growth of our sector.”

KitGuru says: We have seen some big partnerships in esports lately with AOC sponsoring G2 and BT announcing a deal with Excel in the UK proving that the big brand names are serious about esports too.