Microsoft has announced a range of keyboards that feature dedicated Office and emoji keys. Two new keyboards will be available, one larger ergonomic split layout and a smaller, slim Bluetooth version.

Both the new designs will feature the dedicated Office and emoji keys, the Office key will replace the right-hand windows key and will launch the Office for Windows 10 app which is a central hub for the Microsoft productivity suite. The Office key can also be used as a shortcut key to open Office apps such as Word (office key + W) or Excel (office key + X).

Alongside the Office key is the new emoji dedicated key. When pressed it will launch the emoji picker inside Windows 10. However, you won’t be able to assign the emoji key to a specific emoji or create shortcuts for it.

It is not clear whether other keyboard manufacturers will be following suit with these new dedicated keys yet. Microsoft has a licensing agreement in place for the right-hand Windows key to ensure the appearance of Keyboards remains consistent, there are no signs at the moment that Microsoft will be licensing its new dedicated Office or emoji keys. 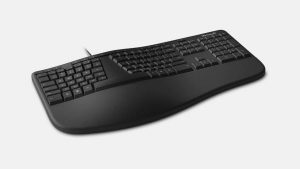 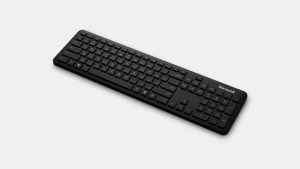 Microsoft claims the new Ergonomic Keyboard will offer all-day typing comfort with a refined split layout design. The main features of the Microsoft Ergonomic Keyboard are an improved cushion palm rest covered in premium fabric, dedicated shortcut keys for Office 365, emojis, search and media controls with a built-in number pad on the right.

A Microsoft Bluetooth Keyboard is launching alongside the Ergonomic Keyboard, which is a much slimmer design. Key features include Bluetooth connectivity with up to two years battery life, a solid durable feel and the same shortcut keys for Office, emojis, media with a right-hand number pad.

KitGuru says: An emoji shortcut key certainly is an interesting idea, although I’m not sure it is that useful. However, the office key will come in handy, especially since the keyboards are aimed more towards business use.