This Easter’s gaming extravaganza at Newbury Racecourse has seen some notable ‘firsts’. Some software. Some hardware. KitGuru spies were on hand to see real world gaming on a special keyboard.

Multiplay’s i42 will attract more than 2,000 gaming enthusiasts over the toasty Bank Holiday weekend. Pro-gamers, exhibitors and sponsors were all out in force.

In the main building, which spans 3 floors, the lucky gamers who bought early tickets and reserved space on lower floors, were considering themselves very lucky indeed.

Given that the temperature outside only dipped to 25 degrees by 6pm – in the middle of the day it was sauna-esque on the top floors.

Aside from the physics of the known universe, another reason why the ground floor was kept so chilled was all the cool stuff on show.

On the Thermaltake booth, there was a first public outing for the Tt eSports non-ghosting mechanical keyboard, which they claim as a world’s first.

Sure, there are non-ghosting membrane keyboards and you can put a nobby PS/2 convertor on other mechanicals to achieve simultaneous key depressions – but this unit is a pure USB device and it was attracting a lot of attention from the pro-gamers at the event. The PS/2 connector has now been officially retired by Tt eSports.

KitGuru says: We’ll get one of these into the Lab as soon as possible and hit it with hammers, elbows and bananas to see just how many keys it does recognise as being pressed at once.

Previous Bulldozer roadmap adjustments in wake of Sandy Bridge E revelations?
Next Brink shown exclusively at Multiplay i42 – hands on! 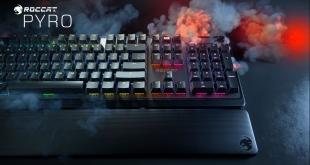 Roccat has two new keyboards hitting the market – the Magma and Pyro RGB. The …