Over the Christmas period, we swapped the old Tt eSports Poseidon Z for the GooBang Doo and began gaming, writing and surfing to see what this newcomer adds (if anything) to a very crowded gaming peripheral market.

Normally, at this point, we would normally introduce software and set up screens, but the GooBang Doo has none.

This is an average-size TKL keyboard. It’s just the chunky mechanical keys that add bulk to the overall appearance. Being TenKeyLess it is horizontally compact. As a gamer, any space I save on my physical desktop is a bonus.

We found the GooBang Doo a really good keyboard to game on. The blue switches are very responsive and felt just like the Cherry MX switches we’re used to. It can handle simultaneous key expressions without fail, so your interactions are likely to stay clean/articulate – even in the heat of battle.

The tactile feedback of a key depression gives you the positive reinforcement you need when gaming, but a good audio ‘click’ can also saves time/reduce errors during gameplay – particularly in first person shooters. If anything, we found the Outemu sound slightly crisper/more precise than the Cherry blue audio profile. A quick bit of research online showed that we’re not alone in that conclusion. Sure, the overall lifespan of Cherry keys could well be better than cheaper rival options, but during our testing we found the Outemu to be a very capable alternative. 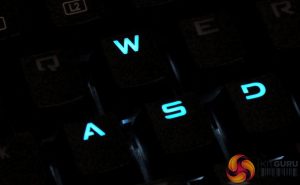 If you’re a softcore/casual gamer who’s looking to game more, then affordable mechanical keyboards could be the way to go. While the idea of a ‘hair trigger’ might scare beginners, those who game more frequently are looking for near-instant response. In a tense boss-battle it may be just the thing you need to keep you alive – securing your team’s victory.

We’d like to think that blue switches will also give you an advantage over a well-matched opponent using a membrane keyboard in a 1-on-1 battle – but you would need to try this for yourself to see if mechanical suits your style. 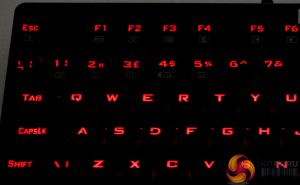 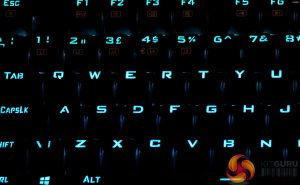 I will say this, in order for me to even consider buying a keyboard, I would need macro keys, the amount of ease it brings to gameplay is invaluable if you need to quickly carry out a short series of movements/weapon switching.

Spacing between the keys is good and with my WASD hand I can hit all the way up to ESC on the far corner, most games I play utilize constantly using ctrl and shift which are easily accessible, for that I am glad.

Typing overall was pleasant and accurate. The Outemu blue switches work well, but for those of you who normally type on a membrane keyboard, you’ll need to get used to the noise.

Getting used to the layout and pressure requirements took about an hour. The biggest challenge was the narrow distance between the keys – but this could be an advantage for younger gamers or for those with smaller hands. I suffer from hereditary FrankFurterFingeritus, so there was a learning curve, but not too steep.

The function keys double up as media control keys, which can be useful for films/music etc. It’s cool to have these shortcuts available, but I prefer to control audio with a physical dial etc attached to the speakers.

The lighting was cool, if basic. The LEDs, overall, didn’t give that much light. For the brilliant colours like blue, this was no problem – but the red end of the spectrum was distinctly dull.  Anyone who’s used the Tt eSports Poseidon Z will know that its blue lighting is positively piercing. 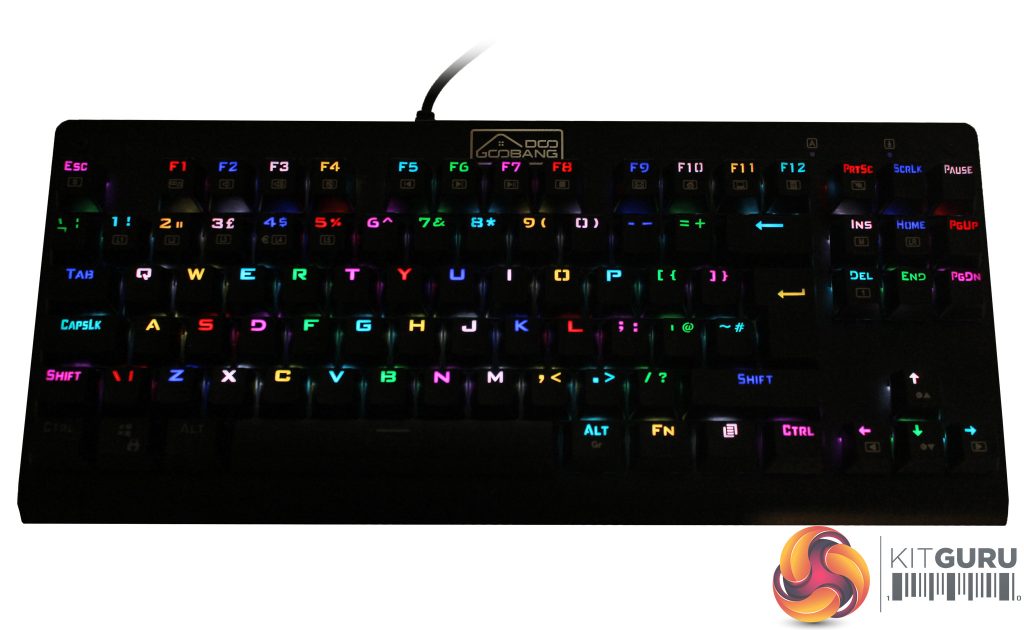 The GooBang Doo is much more muted. Choosing a keyboard based on lighting levels is unlikely to be the prime criteria for most people, but – in case it’s important for you – we’re letting you know that it’s not super bright.  One of the options you can access with function keys, let’s the keyboard display a rainbow effect – so you can see that it is, indeed, RGB.