ASUS has been teasing its Republic of Gamers RGB keyboard since very early 2015 and after plenty of changes and a few different iterations, the keyboard is finally ready to launch. Today, ASUS announced that its ROG Claymore and ROG Claymore Core mechanical keyboards will finally hit the market next week.

The ROG Claymore is the world’s first RGB backlit keyboard to include a detachable numpad, allowing this keyboard to appeal to those who prefer the full-sized layout and those who prefer a smaller ten-keyless design. On top of that, the numpad can be attached to either side of the keyboard.

The ROG Claymore comes with Cherry MX RGB switches, the same featured in the Corsair K70 RGB, though aside from Red, Blue and Brown flavours, you will also be able to buy a Black switch version. The Claymore also comes with a durable aluminium chassis, which carries the usual ROG design flair. Aside from that, this is also the first keyboard to come equipped with support for ASUS Aura Sync, which will allow those with an Asus motherboard, GPU and peripherals to sync the colours across the whole lot.

KitGuru Says: As much as I like the look of the ROG Claymore keyboard, that price is very high indeed for a ten-keyless board. Hopefully the full-sized version won’t end up costing a huge amount more but that remains to be seen for now. Are any of you looking to pick up a new mechanical keyboard this year? How much are you willing to spend on a decent keyboard? 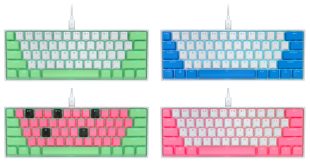