G.Skill goes for the understated look with KM570 RGB

Just over a year ago, G.Skill launched its first RGB gaming keyboard, the KM780, and while it was a great keyboard in its own right, it did feature an over the top ‘gamer' aesthetic, which doesn't always appeal to everyone. That is changing this year as G.Skill has just launched the new Ripjaws KM570 mechanical keyboard, which strips things back in the design department with a classic look while maintaining a premium build and high-quality switches.

The Ripjaws KM570 is an RGB keyboard just like its bigger brother. It also features CherryMX RGB switches, which are always manufactured to high standards and often preferred by many over Kailh switches, which can come with shorter life-spans and a slightly different feel. The KM570 comes with Brown, Blue and Red switch options, so you can pick between clicky, tactile and linear switches. 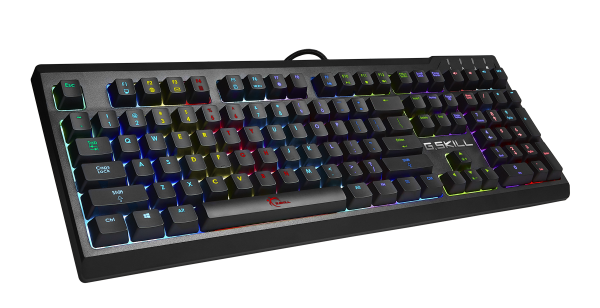 As great as this keyboard sounds, it's not available just yet. If you prefer Red or Brown switches, then you should be able to find one at retail in December. However, if you appreciate the clicky feedback of Cherry Blue switches, then you will be waiting until January.

KitGuru Says: I tend to favour the simple, understated look when it comes to keyboards, rather than anything overly gaudy and flashy. That said, I do quite like my RGB LEDs. Are many of you currently in the market for a new keyboard? What brand do you usually go with?

Previous QNAP and AMD team up to launch APU powered NAS series
Next False alarm, CD Projekt Red is not under threat of hostile takeover