This week, QNAP Systems has announced that it has officially teamed up with AMD to bring out a new series of high-performance NAS devices, all powered by AMD’s Embedded R-Series quad-core APUs. The TVS-x73 NAS series can come equipped with up to 64GB of RAM, an AES-NI hardware encryption engine, 10gbE expandability, 4K video decoding and more. 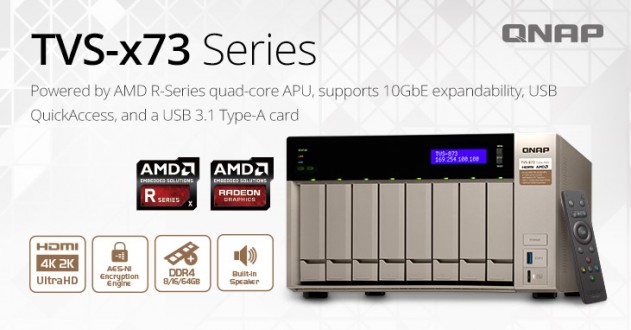 The TVS-x73 comes in a metal design with four, six and eight-bay models. The exact APU being used here is the AMD RX-421BD, which has a 2.1GHz base clock and boosts up to 3.4GHz. The NAS supports dual-channel DDR4 RAM up to 64GB, has four Gigabit LAN ports, two M.2 SSD slots and two PCIe slots for flexibility.

Thanks to the APU’s GCN architecture, this NAS has enough performance for 4K H.264 video decoding, encoding and playback, making it a good choice for those looking to store plenty of Ultra-HD content. The final big feature here is the latest 64-bit QTS 4.3 operating system, which offers new applications to centralise things like email accounts and file organisation, while also supporting apps like QButton for initialising IoT applications.

KitGuru Says: I don’t have much experience with NAS solutions myself but I do know quite a few of our readers make good use of them. What do you think of the latest AMD-powered option from QNAP?