Back in 2018, Razer launched the Huntsman gaming keyboard, using its newly developed Optical Switches. Now three years later, the Huntsman V2 has arrived, refining and tweaking the Optical Switch technology as well as other features based on feedback from users and esports players.

The Razer Huntsman V2 comes in a full-sized version and a ten keyless version. Both feature Razer's 2nd generation Optical Switches, 8K HyperPolling, Doubleshot PBT keycaps and improved acoustics. There are two versions of the new Optical Switch – Clicky Purple and Linear Red. The former is a tactile switch with an audible click with each press, while the latter is a linear switch with no tactile feedback or click. 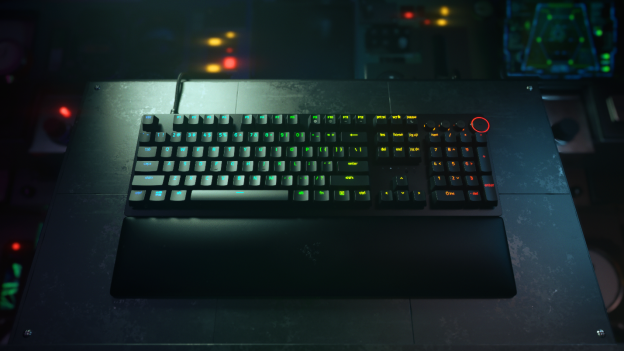 Razer's new optical switches use an infra-red beam of light to activate the switch signal, completely eliminating debounce delay. With this faster response time in place, the keyboard can also benefit from Razer HyperPolling Technology, surpassing the polling rate of standard keyboards by boosting from a 1000Hz polling rate to 8000Hz.

Aside from the new switches and HyperPolling, Razer has also upgraded to Doubleshot PBT keycaps, while also putting in sound dampening measures. Both the full-sized version and the Ten keyless version also come with an improved ergonomic wrist rest and a detachable USB-C cable.

KitGuru Says: The Razer Huntsman V2 looks to have made some key improvements over the original. Are any of you currently looking for a new gaming keyboard?